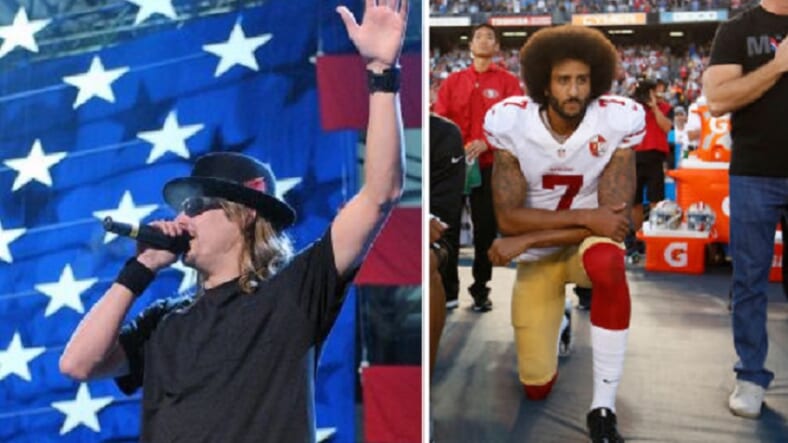 Kid Rock isn’t a big fan of Colin Kaepernick. In fact, the rock star turned odds-on favorite to be the next senator from the great state of Michigan has begun making it a point to take a moment in concerts and make sure his fans are aware of his feelings about the controversial QB.

You’ll recall that Kaepernick made major waves in the NFL in 2016 for taking a knee as a form of protest during the national anthem prior to playing games. Kaepernick, a 49er prior to being released from the team, has said that he will not “show pride in a flag for a country that oppresses black people” and other marginalized groups.

At a recent concert in Iowa, Rock reportedly  said, “Football’s about ready to start. You know what? Fuck Colin Kaepernick.”

The thing is, that’s not the first time he’s said those last three words. As the concert clip above makes clear, he took a moment at a performance in 2016 to express the same sentiment.

Kaepernick isn’t likely to worry about the famously conservative rocker’s opinion of him. The quarterback is having a hell of a time finding a place to land prior to the 2017-18 kickoff.

One unnamed NFL exec quoted by ESPN gave some insight as to why: “It’s about the risk of what happens to the team concept when you sign a guy—a quarterback—who has put his personal agenda ahead of what we are all charged to do, which is put the team first.”

“As a team builder,” the exec continued, “I cannot risk that happening again, especially for a borderline starter who needs the entire offense catered to his style.”

It’d be more honest if execs like that just followed Kid Rock’s lead and said what they really mean, which is basically, “fuck Colin Kaepernick.”