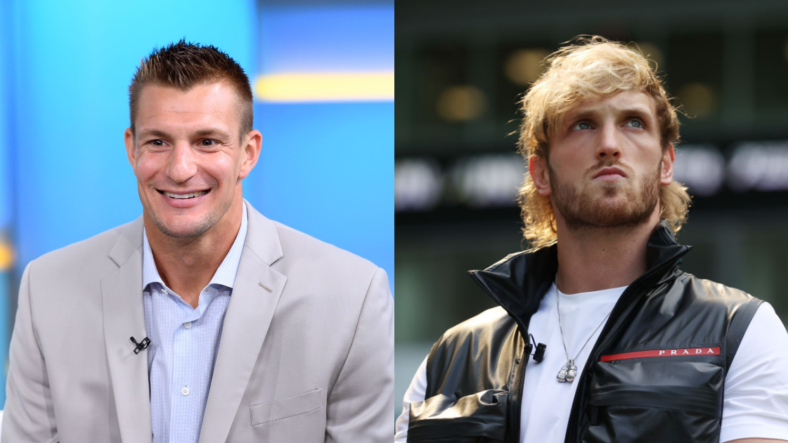 TMZ reports that the Tampa Bay Buccaneers tight end’s  four brothers—Glenn, Dan, Chris and Gordie—all agreed to go one round against Paul with Gronk serving as referee. And YouTuber-turned-boxer Paul outboxed the bigger Gronk brothers with surprising ease, even though several had played in the NFL.

Check out the full embedded video above, along with TMZ’s play-by-play below to tell Gronk’s bros apart:

First up was Glenn … a 6’3″, 234-pound former NFL player who spent time with the Patriots.Look, Glenn put up a good fight but it was clear he was just outmatched by Logan who dominated until they stopped the fight.Round 2 was Chris Gronkowski’s turn … the former NFL fullback got rocked right away and the fight was quickly stopped.Round 3 featured Dan Gronkowski — a former NFL tight end who played for the Lions, Broncos, Pats and Browns.Dan did not do well — getting rocked hard and dropped. They stopped that pretty quickly, too.Finally, it was Gordie’s turn … and Logan smothered him with a barrage of power shots until Rob stepped in and pulled them apart.

Following the bout, Rob gave credit to his brothers for getting into the ring against Paul, who has been training as a boxer for months.

But if anything, Paul showed that skill beats size–something that will definitely be evident when he faces the much smaller Mayweather, who is considered of the best boxers of all time.

After losing to fellow YouTuber KSI in 2019, Paul is taking a HUGE step up against Mayweather, who recently tussled with Logan’s brother Jake Paul after he stole Maywather’s ball cap at a wild press conference.