The Mets pitcher was suspended after a downward spiral that began when he saw the Brazilian supermodel with Patriots receiver Edelman, her ex-boyfriend. HARSH. 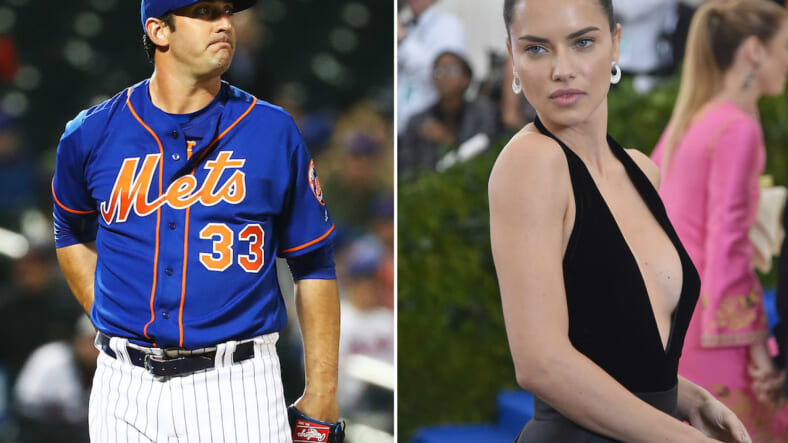 The New York Mets, a perennial National League laughing stock, were plunged even further into chaos on Saturday when pitcher Matt Harvey was suspended after failing to show up for the teams game in Queens.

On Tuesday, Harvey admitted that he was out too late on Friday night, played a round of golf Saturday morning and just wasn’t ready to show up to work later that day. And now, Page Six has an explanation for the 28-year-old’s rough night—Adriana Lima broke up with him and had a booty call with Julian Edelman.

The trouble reportedly began early last week when Lima attended the Met Gala with the Patriots receiver, who she broke up with in March. Seeing them together turned Harvey into a “emotional wreck,” Page Six says.

Those feelings lingered all week and Harvey was “out Friday night blowing off steam and trying to get over Lima.”

After drinking until 4a.m., Harvey played golf Saturday morning. Lima called him while he was on the links and that threw him into a tailspin.

If he managed to relax at all is unknown, because Lima called him while he was playing golf before the Mets game Saturday and had a conversation that made him even more upset, sources said.

No one will blame Harvey for falling in love with Lima. She’s a stunner. But he was delusional if thought she might settle down with him.

Sources said Harvey had little chance with Lima — who was married to Serbian basketball player Marko Jaric for five years and who has been linked to celebs such as rocker Lenny Kravitz and Yankees great Derek Jeter.

The stunning Brazilian brunette isn’t looking to be tied down with any man right now, a source said.

“She dates men like male sports stars go through women,” the source said. “She’s beautiful, one of the most desired women in the world, she’s fun, has already been married and isn’t looking to settle down.”

Harvey is also known for playing the field, and Lima was just the latest in a series of models seen on his arm.

She’s been married, already has kids and just might be in her insatiable maneater phase. He should just consider himself that she allowed him to spend anytime with her at all.