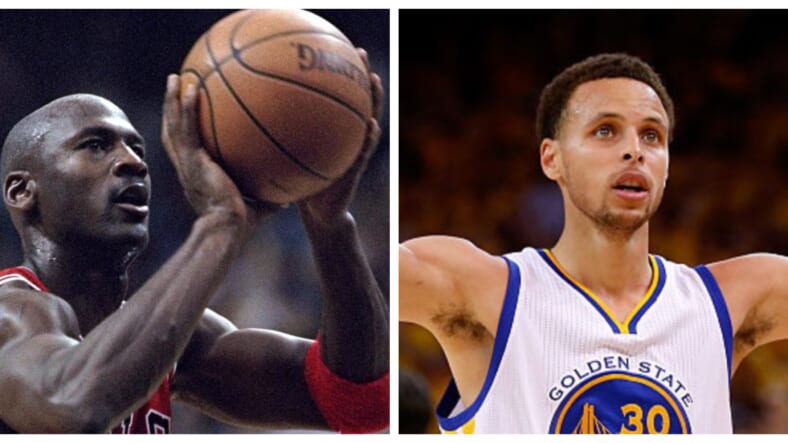 Michael Jordan is the GOAT. As a basketball legend and team owner he’s free to say what he wants. And he does. Most recently, His Airness declared that Steph Curry, one of the NBA’s all-time great three-point shooters, is still not a shoo-in for the Hall of Fame just yet.

“He’s still a great player, not a hall of famer yet, though,” Michael Jordan jokes about Steph Curry as he tells @craigmelvin he’d keep the same four guys (Hakeem Olajuwon, Magic Johnson, Scottie Pippen and James Worthy) to play against anyone with pic.twitter.com/tDBQKjDQAa

Jordan gave a buzzed-about interview to NBC’s Craig Melvin on the Today Show and was asked about the time he said he’d select these guys to play him in a pickup game: Scottie Pippen, Magic Johnson, Hakeem Olajuwon, and James Worthy.

Melvin followed up with “So Steph Curry shouldn’t be offended when he watches this?”

Jordan smiled and said, “I hope not. He’s still a great player. Not a Hall of Famer yet, though.” Then he doubled down: “He’s not.”

C’mon, he looked like he was joking, right? Craig Melvin’s response would make it seem so. After all, it’s damn hard to not argue that Curry will end up in the HoF one day. He’s been league MVP twice and will one day be considered the king of the three-point shot.

Still, Jordan, despite being long retired now, has never stopped being the fierce competitor he was at his most dominant in the NBA. He’s shaded Kobe Bryant (among others) as well.

Fans on Twitter took him pretty seriously, despite the smiles.

I'm not a Golden State fan or even that big of a Curry fan but he's definitely a Hall of Famer. Michael Jordan just the meanest case of jaundice to ever live.

I respect the 🐐 MJ but if @StephenCurry30 Retired today he for sure a Hall of famer…. how can a guy who won back to back mvps with 3 rings not 😂😂😂 smh RT @Ballislife: Michael Jordan says Steph Curry “is is a great player. Not a Hall of Famer yet.” pic.twitter.com/GewL0Rz9Qm

Steph Curry could have missed 2 seasons and retired yesterday and still be a Hall of Famer.
pic.twitter.com/UVyIkFuH8b

Michael Jordan said Curry is a great player but not a hall of famer yet.

Is he a hall of famer yet to you?

Another famous retired NBA player, Magic Johnson, probably had the most realistic take.

Everyone relax. We know Steph Curry is a future Hall of Famer…Michael Jordan couldn’t say it because he would get fined by the league.

Basically, everyone needs to calm down. Jordan is really just being Jordan, in the end, for whatever reason. It’s GOAT privilege, perhaps.

Maybe Steph Curry will dedicate his hall of fame speech—or a record-breaking three-pointer—to no. 23 as a joke in return.