LeBron James Vs. Michael Jordan: Who Ya Got?

The NBA’s biggest star goes one-on-one with The GOAT. 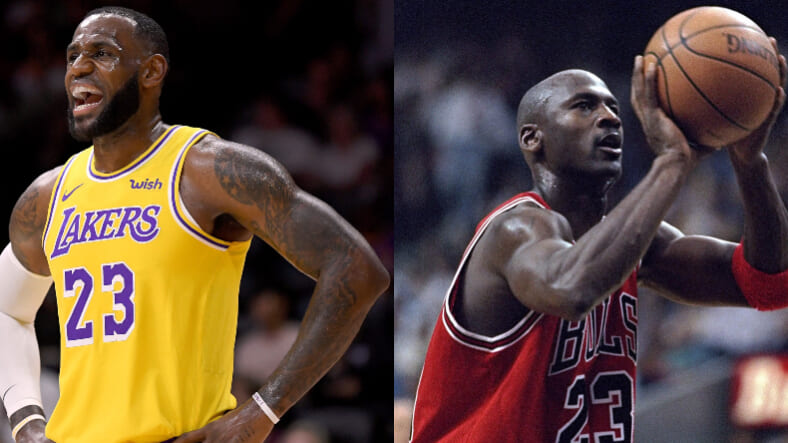 When it comes to NBA GOAT debates, Michael Jordan is typically a slam dunk choice. Fans were recently reminded of the Bulls legend’s unparalleled skillset and killer instinct by ESPN’s wildly popular The Last Dance docuseries, and the continued relevance of Air Jordans and the Jordan Brand further elevates MJ’s influence beyond basketball.

But now that the NBA’s current biggest star LeBron James has led the Lakers to win his fourth NBA title, those inevitable comparisons with the mighty MJ suddenly don’t seem so out of reach. Even though Jordan—who went 6-0 in his NBA Finals appearances and clinched MVP honors in each—retired the season before a young LeBron entered the NBA, the two basketball icons will forever be pitted against each other in a mythical game of generational one-on-one—not to mention starring in dueling versions of Space Jam.

In the latest salvo fired in this eternal debate, Floyd Mayweather recently declared on Shannon Sharpe’s Club Shay Shay that James would beat Jordan one-on-one in their primes, as James is just “too big and strong”, but tapped MJ as the better overall player. “I love LeBron, but one thing about Michael Jordan: he’s going to come out there every night to try and kill you,” says the undefeated Mayweather who likened Jordan’s ferocious instincts to his own in the boxing ring.

But never mind what Floyd says, which NBA legend do you think reigns supreme, Michael Jordan or LeBron James? Go to versusgame.com on your phone to predict the winner of this challenge and other fun face-offs!