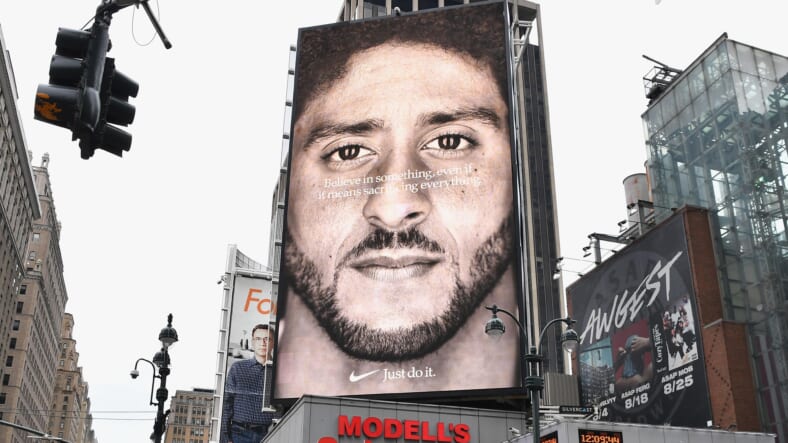 Shares closed at $83.47 on Thursday evening, marking the highest stock value in the 54-year-old company’s history. Bloomberg has further details on how Nike has fared since taking their partnership with the NFL quarterback-turned-activist public.

[Edison Trends] scanned receipts from more than 200 online retailers (including Nike.com) and found that that Tuesday after Labor Day, for example, the first full day after Kaepernick’s ad went viral, Nike purchases were 22 percent higher than the same day in 2017. On Wednesday they were 42 percent higher, and Thursday they were 23 percent higher. They remained above 2017 levels through the end of the week.

Believe in something. Even if it means sacrificing everything. #JustDoIt pic.twitter.com/x5TnU7Z51i

Though Nike stock dipped 3 percent immediately following the Kaepernick announcement, online sales surged 31 percent from the Sunday of Labor Day weekend through Tuesday as some protesters voiced their displeasure by burning their swoosh-embroidered shoes online.

The full impact of the extremely divisive ads celebrating the 30th anniversary of the “Just Do It” slogan likely won’t be realized for some time.

LeBron James, who has a lifetime contract with Nike and once compared Kaepernick to Martin Luther King Jr. and Muhammad Ali, celebrated the news with a tongue-in-cheek tweet.

Nike stock is on fire pic.twitter.com/ufulDIJXmc

Nike stock currently the highest it's ever been ✊🏻 pic.twitter.com/3fRzlSeLqZ

Nike stock up again today. That boycott is a joke

For now, it’s clear that Nike’s new spokesman is paying off.