Could the Suns star be Kendall’s latest NBA conquest? 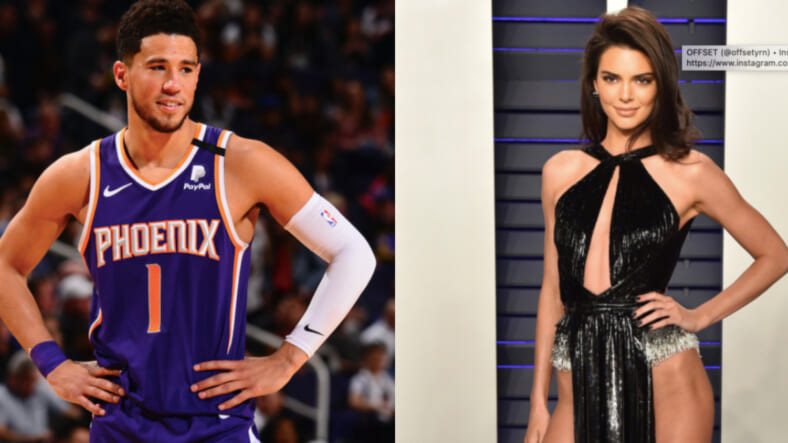 Phoenix Suns phenom Devin Booker didn’t need more than a day to seemingly meet up with Kendall Jenner in Malibu after his team was bounced from playoff contention at the NBA Bubble in Orlando.

The high-profile couple were reportedly spotted with Kendall’s sister Kylie Jenner at sushi restaurant Nobu on Saturday. On Friday, the 8-0 Suns lost a tiebreaker for the No. 9 tournament seed to the Memphis Grizzlies.

The New York Post points out that Jenner and Booker were first linked in April, when video emerged of the reality star-turned-supermodel getting into Booker’s Mercedes-Benz Maybach.

“Kendall and friends have a small social circle amongst the group, who have been following the same social distancing and physical distancing guidelines. Devin is a friend and is part of the small group,” a source told TMZ. “They took a road trip for some much needed air.”

Despite the source’s assertion, flirty exchanges on social media have kept the rumor mill buzzing. Jenner recently shared an Instagram video of herself captioned with a “strawberry” emoji. Booker quickly commented, “I like strawberries” and received flurry of strawberry animations from Jenner in response. Yes, it does sound ridiculous, but then again that’s just the sort of thing newly-smitten couples do.

Jenner also has a history of dating pro basketball players, including Philadelphia 76ers point guard Ben Simmons and Detroit Pistons forward Blake Griffin. It sure looks like Booker just might be her next baller beau.