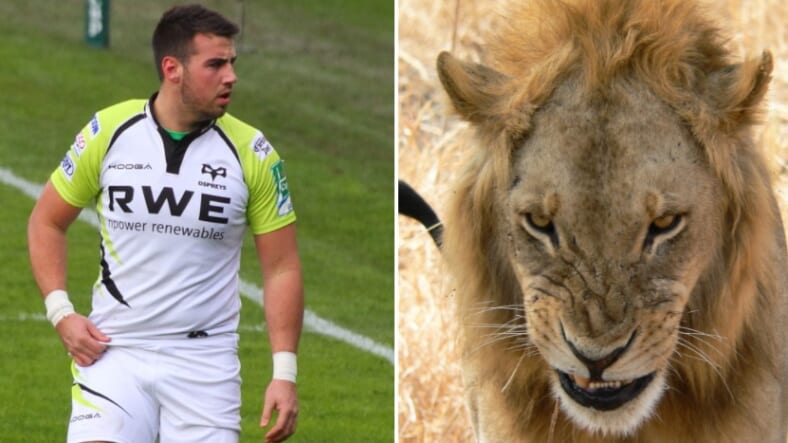 Pro athletes often face the stereotype that they’re dumb. Even fans may assume all the time they’ve spent honing their bodies has diminished their intellects. This is unfair. Many are avid readers, good writers, musicians, geniuses at business—you name it.

Scott Baldwin strokes a lion to remind us Darwinism, despite being heavily shackled, is still doing its thing.https://t.co/htQlmpXBTr

The video above is of Baldwin petting the nice, big, fluffy kitty, then the big fluffy kitty reminding the hooker for the Ospreys (a pro rugby team based in Wales) that it’s a damn apex predator with massive fangs.

Baldwin was reportedly treated with antibiotics and received stitches for his trouble and should be okay.

His team’s coach, Steve Tandy, was not pleased. “I don’t know what sort of wildlife show Scott has been watching where you can pat a lion on the head as if it’s a kitten,” he said. At the same press conference, Tandy also said this was “one of the silliest things” he’s encountered.

For his part, Baldwin figured the bite was payback for being rude.

2/3 should of know he wouldn't be impressed with me stroking his lioness before introducing myself to him first @AndyGoode10 #MyBad ✋🏼 pic.twitter.com/cSclBsvS72

Baldwin can count this a lesson learned. He can also count himself lucky he still has all his fingers to count with.