People are ridiculing Romo’s outraged take on Winfield flashing the peace sign at Hill during the Big Game. 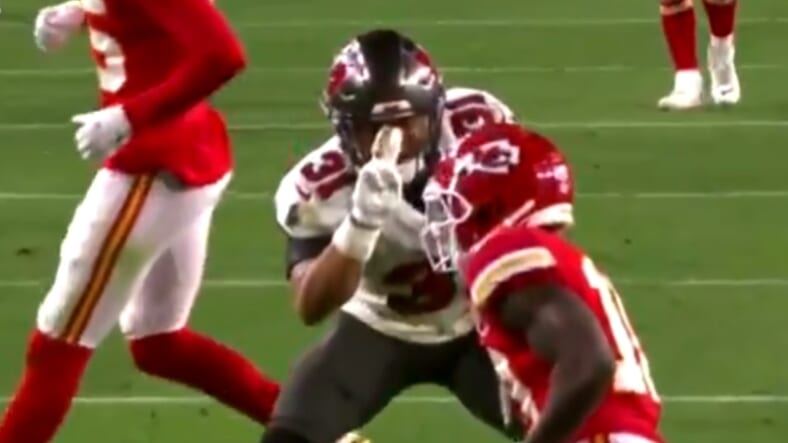 Facing a dire situation with minutes left in Super Bowl LV, the Kansas City Chiefs desperately tried a fourth-and-10 conversion with the hope of chipping away at a 22-point deficit. An out-of-pocket pass from Chiefs quarterback Patrick Mahomes to receiver Tyreek Hill was expertly broken up by rookie Bucs secondary Antoine Winfield, who then threw up Hill’s signature “deuces” sign.

After Winfield was flagged for unsportsmanlike conduct, announcers Jim Nantz and Tony Romo criticized Winfield’s taunt, with the former Dallas Cowboys QB likening it to “kicking a guy when he’s down.” Needless to say, the internet did not agree.

Hill burned Winfield with the exact same gesture at the end of a 75-yard touchdown during the Bucs and Chiefs’ last meeting in Week 12. And Hill wasn’t penalized.

“The taunting, man, it’s something I just had to do,” Winfield said per NBC Sports. “When we played them earlier, Hill went off on us. He back-flipped in front of my face and gave me the peace sign. So it was only right that I gave him the peace sign right back to him. It felt amazing to do that. I’m not even gonna lie.”

Many football fans—as well as bloggers at Barstool Sports, SB Nation and elsewhere—were all for Winfield exacting revenge on his rival.

“I’m applauding this level of petty from a rookie in the super bowl 10/10 times, sorry,” one Twitter user wrote.

I'm applauding this level of petty from a rookie in the super bowl 10/10 times, sorry pic.twitter.com/JyfxHNzg9I

“Tony Romo saying he doesn’t condone kicking someone when he’s down with a deuces to Tyreek Hill….. come on man,” said another.

Tony romo saying he doesn’t condone kicking someone when he’s down with a deuces to tyreek hill….. come on man.

“Regarding Antoine Winfield Jr. giving Tyreek the peace sign: ‘I don’t like or condone that’ – Tony Romo on broadcast. ‘That’s absolutely perfect’ – everyone else in America,” a third commenter added.

Antoine Winfield Jr. got his revenge against Tyreek 👀 pic.twitter.com/PPwFxvYJBB

Regardless, the Tom Brady-led Bucs secured their second championship in franchise history, holding the Chiefs to 31-9 throughout the entire fourth quarter.