You’ve gotta see it to believe it. 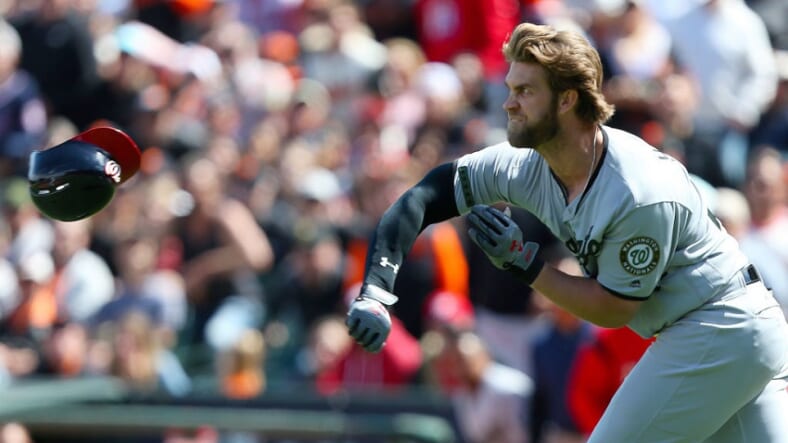 Baseball is a pretty peaceful game compared to football or hockey—until pitchers start beaning batters. Then fists often fly and everybody gets in on the fight. Bryce Harper launched one of these team fights between his Washington Nationals and the San Francisco Giants on Memorial Day, but in his rage he did something so ridiculous that social media ended having a field day ragging on it.

Giants pitcher Hunter Strickland had just struck Harper in the hip with what was surely a ferociously painful 98 mph pitch when Harper came for him, hurling his batting helmet as he ran. In the wire photo above the move looked vicious, but footage from the game revealed it was actually a comically awkward move.

Harper later explained that he certainly didn’t want to get suspended—as both he and Strickland were—but “sometimes you’ve just got to go and get him. You can’t hesitate. You either go to first base or go get him and I decided to go get him.”

Harper may have proven a point he felt he needed to make, but after video of his charging the pitcher hit social media, Twitter went after him.

Bryce Harper can work on his helmet throw during his suspension pic.twitter.com/mA6TEvfGjK

Where was Bryce Harper throwing that helmet at😂😂😂😂😂 #MLB #nationals pic.twitter.com/w7UwmFIoZh

Who knew that accurately hurling a helmet in a rage was a necessary pro baseball skill?

At least Bryce Harper now will likely have a few games off due to suspension to really nail that move the next time he needs to take a pitcher out.