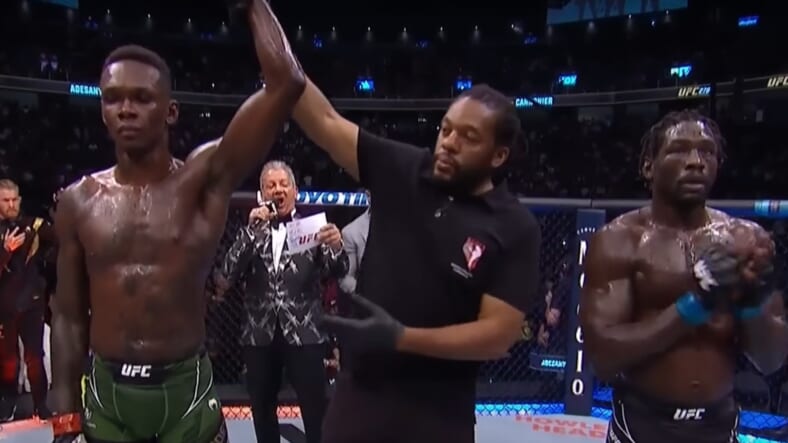 The Nigerian-born Kiwi faced Alaskan knockout artist Jared Cannonier, a former a heavyweight. The champion negated his challenger’s heavyweight-grade firepower with a game plan based on jabs, leg kicks and clever defensive movement.

It was not the most exciting thing to watch, but it kept him out of danger and allowed him to outland his foe in nearly every round en route to a unanimous-decision win.

Adesanya’s next fight is seemingly already set in stone.

Earlier on the UFC 276 main card, Brazilian striking specialist Alex Pereira burst into title contention with a first-round knockout of No. 4-ranked contender Sean Strickland. It was his first fight with a ranked opponent, and just his third fight in the Octagon, which would ordinarily not be enough to earn a title shot. But Pereira is a special case—he has beaten Adesanya twice in kickboxing competition: first by decision, then by knockout.

All signs now point to a rematch under MMA rules, with the UFC’s middleweight strap hanging in the balance.

Both men seem to be ready for the opportunity.

“Many people talk about my two wins over Adesanya,” Pereira said in his post-fight interview with commentator Joe Rogan. “Today I just defeated the No. 4 in the rankings, so I know I earned it.”

“The first time I told you it was an error,” Adesanya, who is considered one of the sport’s top fighters, echoed in his own post-fight interview. “Next time I put you on skates, you’re going to get frozen like Elsa.”

In the co-main event, featherweight champion Alexander Volkanovski closed out a thrilling trilogy with a unanimous decision victory over fellow great Max Holloway.

“I’m happy that all happened,” he said after the win. “It was a good experience for me, it made me unstoppable and invincible. A lot of people were bringing me down. I had to stand up for myself from all angles.”

The win moved the Australian to 3-0 against his Hawaiian rival. While the first two fights were very close—hence the trilogy—the third was not. The champion controlled the fight through every round, leaving his foe battered and bloodied.

Volkanovski, also considered a top pound-for-pound fighter, is now on a ridiculous 22-fight win streak, including four title defenses. From here, he will most likely hike up to the lightweight division in a bid for a second title.

Popular bantamweight contender Sean O’Malley was also back in action at UFC 276, taking on No. 9-ranked contender Pedro Munhoz in the toughest test of his career to date. Regrettably, the pair’s fight ended with a disappointing no contest when Munhoz could not continue after an accidental second-round eye poke.