The World Series Has Looked Like the Home Run Derby, And Everyone’s Blaming Juiced Balls

The Dodgers and Astros have hit 22 dongs in the series, an all-time record. 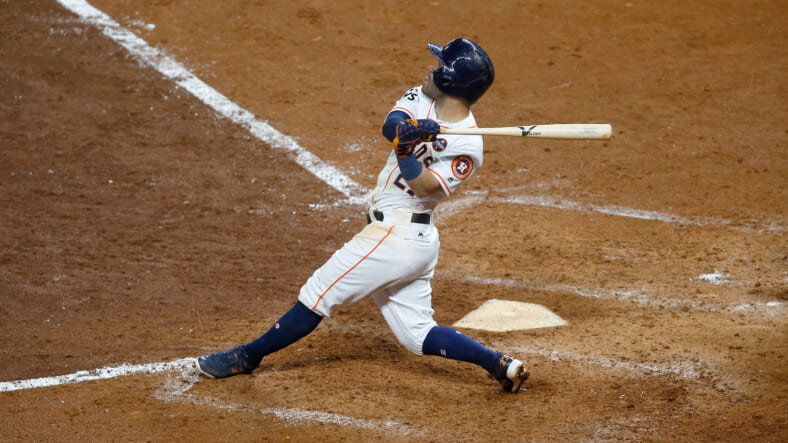 At the end of Sunday night’s World Series game five, which saw the Astros beat the Dodgers 13-12 in 10 innings of cartoonishly thrilling baseball, the only natural response was to collapse in a heap and of frayed nerves and hope to recover in time to get to work in the morning. But now that the morning here, the collective sports community can ask the question on every baseball fan’s mind: What’s up with with all the homers?

On Sunday, the Astros and Dodgers combined for seven dingers. In game two last Wednesday, they hit eight. All told, the teams have slugged 22 homers in this series, setting a new World Series record. And there’s at least one more game to play.

Baseball’s home run surge is not news. That’s been happening for a few years now, with a so-called “juiced ball” often cited as the likeliest culprit. The existence of a juiced ball, which is said to be wrapped tighter, with less prominent seams and a slightly smaller circumference, is hard to dispute at this point. If you’re not swayed by the statistics—2017’s league wide home run total broke the all-time record by more than 400—or the studies—at least two in the past year point directly at the ball—then maybe the absurdity of a one-handed homer in the World Series can convince you.

Balls hit like that haven’t been home runs for decades. Now they are and there’s reason to believe the “juiced ball” problem has been exacerbated in World Series, when home runs have become so common that drunk men think nothing of ripping them from the hands of a woman and throwing them back on to the field (go back and watch the end of the video above).

Sports Illustrated’s Tom Verducci wrote a piece this week about how baseball’s being used in the fall classic are slicker than those used during the regular season.

Pitchers and coaches from both the Dodgers and Astros complained Saturday night about the World Series baseballs—and this time the controversy is not just about liveliness. They say there is a new problem: the baseballs used in the World Series are slicker than the ones used in the regular season because of a difference in the grain of the leather. The slicker World Series balls particularly make it hard to throw a good slider, they claim.

“The World Series ball is slicker. No doubt,” Astros ace Justin Verlander told SI. The problem, according to pitchers quoted in the piece, is that the slick ball makes it harder to throw a slider, a claim backed up by the beating slider-dependent hurlers Yu Darvish and Ken Giles have taken in this series.

Sucks for them but the offense barrage these two lineups have put on in the first five games of this series has been remarkable to watch. Baseball isn’t supposed to be played at this kind of frenetic pace, with leads swinging back and forth and pitchers never standing a chance, but it sure is fun to watch. For some fans though, the homer-happy games, wild as they are, feel wrong, like a “tear in the fabric of baseball relativity,” as NBC’s Craig Calcaterra put it.

He may be on to something. There may be something “wrong” with this new home run -heavy era of baseball, even if in the moment it feels very right. For now though, there’s still a World Series to decide. So let’s talk more about this after the dingers are done.