Luxury timepieces and tennis stars go together like caviar and champagne. 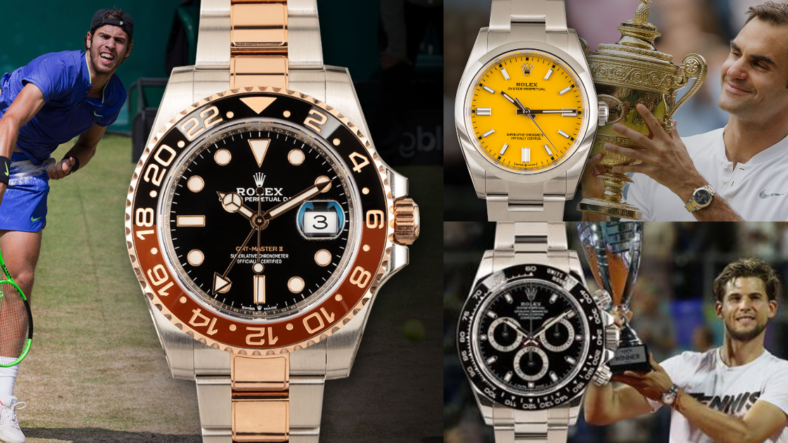 Wimbledon — considered the most prestigious tennis tournament in the world — just held the men’s quarterfinals. Icon Roger Federer fell in a surprise upset to No. 14 seed Hubert Hurkacz, who will go on to face Novak Djokovic in the semifinals on July 9th.

While there’s no doubt it is disappointing to lose, Federer and a number of other players who have taken to Wimbledon’s legendary Perennial Ryegrass courts since the tournament began in June have plenty to be thankful for, like their gorgeous Rolex watches.

Rolex ambassadors who played in this year’s Championships included Federer, the most well-known player in the world and one of the highest paid, earning $9 million a year from his Rolex deal alone. Other brand ambassadors participating in the tournament included the 25th seed in the men’s division, Karen Khachanov, and the 25th seed from the women’s division, Angelique Kerber.

Major endorsement deals for top athletes are nothing new, but Rolex has, for the better part of the last half-century, been a constant presence in the sport, found on the wrists of top names like Federer as well as tennis pros climbing their way up the tournament ladder.

The brand currently sponsors all four Grand Slam tournaments — the Australian Open, French Open, Wimbledon, and the US Open — in addition to some of the world’s top professional players.

So it’s a guarantee that there will be a number of athletes sporting Rolexes — vintage pieces as well as brand new models. Below, check out timepiece choices made by Roger Federer and five of his fellow competitors.

Rolex partnered with Federer back in 2006 in what was one of the largest single endorsements for any professional athlete at the time, a $15 million dollar 10-year contract.

Essentially a lifelong ambassador after renewing his deal with Rolex in 2017, Roger Federer’s favorite watch is the one most associated with him: the 41mm Rolex Datejust II ref. 116334, with a distinct rhodium-colored dial offsetting blue Arabic numerals.

Khachanov was just 23 in 2019 when he signed his Rolex partnership. He is currently ranked no. 29 in the world.

His choice of Rolex is the GMT Master II “Rootbeer.” Designed to show the time in two different time zones simultaneously, the GMT-Master, launched in 1955, was originally developed as a navigation instrument for professionals crisscrossing the globe.

Frenchman Tsonga has had a long-running rivalry on the court with Roger Federer. However fiercely competitive the players may be when swinging a racket, they agree that Rolex is the way to go. Tsonga wears a Rolex Milgauss, which preowned Rolex authority Bob’s Watches says “was first introduced in 1956 as an antimagnetic watch for scientists.”

As Rolexes go the Milgauss may be among the slightly more affordable, with prices starting in the low $8,000 range.

Towering 6’6″ Argentinian Juan Martin del Potro is ranked no. 744 in the world today, though he began his career with a bang, beating Roger Federer while still an unknown in 2009. Since then he’s plagued by injuries that impeded his progress, and he ended up withdrawing from Wimbledon 2021 just before play began.

He sees eye to eye with Federer where luxury watches are concerned — del Potro also wears a Datejust. His stainless steel model is a nod to the tournament from which he withdrew. The Datejust 41 – 126333 has a Slate Wimbledon dial with black and green Roman numeral markers and luminous hands.

Want to rock a Rollie like a tennis pro? Check out either Rolex.com or — for preowned — luxury supersite Bob’s Watches, where each timepiece comes with expert verification of authenticity.