When it comes to valuable sneakers, these are the G.O.A.T. 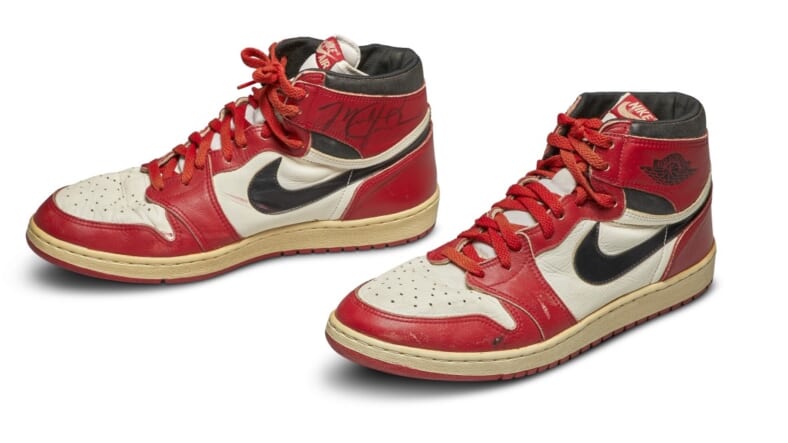 On May 17, the same night ESPN aired the final two episodes of the 10-part series that captured the imaginations of quarantined sports fans everywhere, a signed pair of coveted AJ’s that Jordan wore during his 1984-85 rookie season sold for $560,000 by Sotheby’s auction house, becoming the most expensive sneaker sale ever recorded.

CNBC reports that the iconic kicks went for more than three times the expected price, after a burst of bidding saw value surge by $300,000 in the final 20 minutes. The final price easily bested the previous record holder, a pair of 1972 Nike Waffle Racing “Flat Moon Shoes” that sold for $437,500 in 2019. Sotheby’s didn’t reveal the name of the buyer or seller, but said bidding came from four continents.

The game-worn 1985 Air Jordan 1’s are adorned with the classic Bulls’ colors of red, white and black, and were signed by Jordan with a black permanent marker, making them more valuable than sneakers Jordan signed with a ballpoint pen, which didn’t age as well over time.

“This shows not only the incredible appeal of Michael Jordan as one of the most recognizable and legendary athletes of all time, but also that sneaker collecting is truly a global and growing market,” said Brahm Wachter, Sotheby’s director of e-commerce development.

While Nike’s Air Jordan has long been the most successful spin-off sneaker brand ever, Jordan confirmed in The Last Dance that he originally wanted to sign an endorsement deal with Adidas when he was a 21-year-old NBA rookie. But Jordan’s agent David Falk said that he steered the NBA G.O.A.T. to a significantly sweeter deal with Nike, and the rest is sneaker history.

“Adidas was really dysfunctional by that time,” Falk said in episode five of The Last Dance. “And they had just told me, ‘Look, we’d love to have Jordan, we just can’t make a shoe work at this point in time.’ I wanted Michael to go with Nike because they were the big upstart.”