The automotive/watch partnership will drop its first watch in 2021. 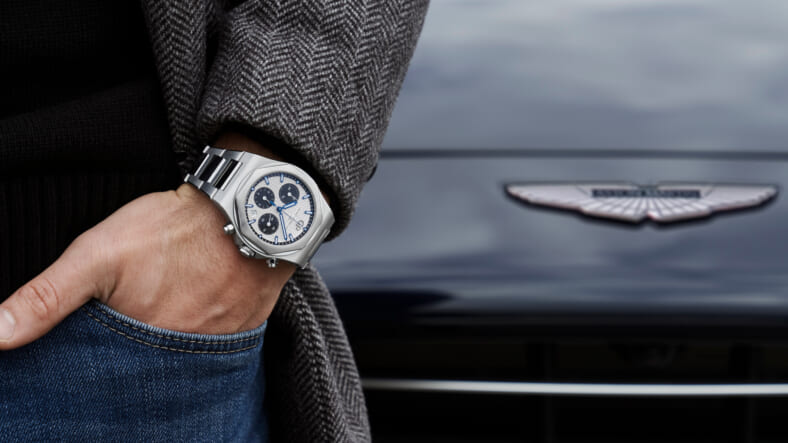 Racing and time measurement have always been inextricably linked, and so the watch world’s latest automotive/watch collaboration makes perfect sense.

With its legendary 1956 DBR1 race car, Aston Martin set the stage for models that became the marque’s noted “DB” heritage vehicles. The lines of the DBR1 with their blend of Mid Century grace and sleek hints of self-contained power reflect Aston Martin’s core blend of functionality and visual aesthetics.

The marque’s models each possess distinctive personalities, but it just takes a glance to know when you’re looking at an Aston Martin.

Aston Martin Lagonda Chief Executive Tobias Moers said in a statement about the new watch collab that “The real beauty of partnerships such as this one is that, although we share very similar core values, the two brands can learn a great deal from one another. Girard-Perregaux is a prolific innovator in the use of materials and new technology.”

Aston Martin Cognizant Formula One Team Chief Executive Officer and Team Principal Otmar Szafnauer was quoted in the same release, saying in part that “Aston Martin and Girard-Perregaux share so many brand touchpoints – a rich history, a glorious heritage, and a relentless devotion to the pursuit of premium quality combined with high technology.”

“On the racetrack, time, too, is of the essence,” Szafnauer said, “Formula One and Aston Martin Cognizant Formula One Team, in particular, will prove themselves to be respectively a fantastic promotional platform and a brilliant marketing partner for Girard-Perregaux, whose timepieces lead the way in terms of quality and desirability.”

If Girard-Perregaux isn’t as familiar as Rolex or Omega, here’s a little history via the joint press release:

Founded in 1791, Girard-Perregaux is one of the oldest fine watchmaking manufactures still in operation and is appreciated by those in the know. This year the company celebrates its 230th anniversary, a fitting testament to the brand’s watchmaking expertise. Indeed, the firm’s history is dotted with exceptional creations that skilfully blend aesthetics and functionality.

These models include the iconic Laureato, born in 1975, as well as the legendary Tourbillon ‘With Three Gold Bridges,’ a watch that made the invisible visible, transforming bridges from just a technical element to an integral part of the timepiece – a first in watchmaking…

Details as to what the forthcoming Aston Martin x Girard-Perregaux partnership will produce are still under wraps.

Aston Martin Cognizant Formula One Team cars will feature Girard-Perregaux branding at the start of the 2021 F1 season in Bahrain.

Aston Martin and Girard-Perregaux expect to put out the first of their limited edition timepieces before the end of 2021.