Cristiano Ronaldo Is Wearing The Most Expensive Rolex Ever Made

The soccer icon’s Rolex GMT-Master Ice has 18 Carats of white gold and retails for nearly $500,000. 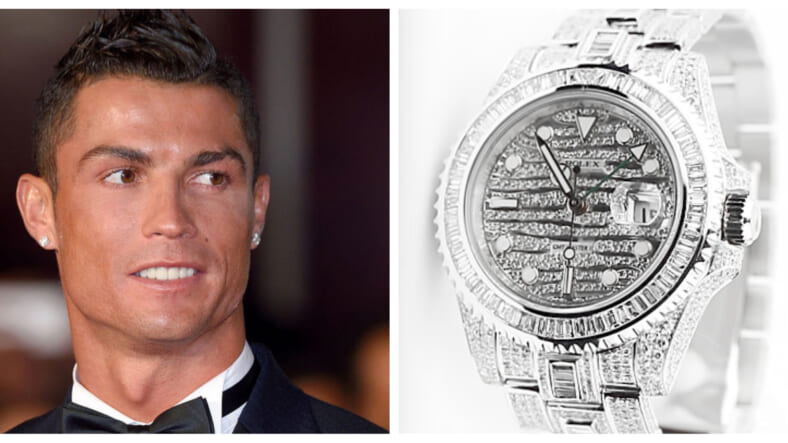 Cristiano Ronaldo makes a lot of money. That kind of goes without saying. The soccer superstar earns an insane amount from his Instagram alone, where he has nearly 200 million followers, and Forbes reports he was the second highest-paid athlete of the decade, behind only Floyd Mayweather. So it was hardly a surprise when Ronaldo recently showed up at a sports conference in Dubai sporting the most expensive retail Rolex ever made, the GMT-Master Ice.

According to Paul Altieri, the Rolex authority behind Bob’s Watches, a Rolex GMT-Master Ice cost $485,350 when it was first introduced to the market in 2018.

Fox Business reported that the Rolex seen on Ronaldo’s wrist during the Dubai presser is worth $497,040—and it was just one of a bank safe deposit box’s worth of bling seen on the Juventus star’s wrist.

Still, the Rolex was perhaps the most dramatic and camera-friendly piece, and Paul Altieri details what makes this watch so special:

The Rolex GMT-Master Ice wristwatch is certainly aesthetically stimulating and visually pleasing. It is made of some of the finest materials, including 18 ct white gold and nearly 30 Carats of brilliantly cut diamonds that cover almost every inch of the watch.Though covered in diamonds, Rolex did not skimp on the watch’s key technological features and the precision for which Rolex is known. The watch features an 18 ct white gold case that has a thickness of 13 mm. This Oyster case, which utilizes a screw-down Triplock winding crown and a screw-down case back, is able to withstand water pressure up to 100 meters (330 feet).

Altieri goes on to write that the watch’s “waterproof case is the caliber 3186 self-winding automatic movement with 31 jewels” and the self-winding timepiece has “a 50-hour power reserve.”

The funny thing is Ronaldo probably didn’t even have to dip into his soccer money to purchase any of these—he actually makes even more off his social media than any of the Kardashians or Jenners, according to Buzz Bingo, topping $40 million for the year.

In other words, he could buy a second Rolex GMT-Master Ice after selling just two Instagram posts.