The raciest custom Rolex ever made. 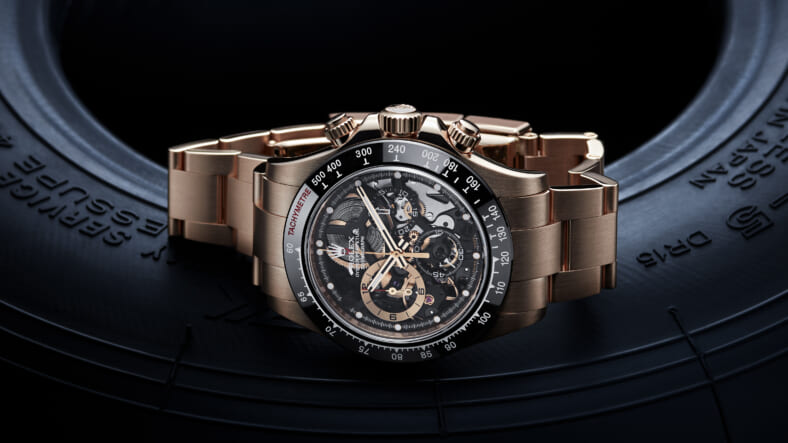 Now the Swiss master craftsmen have given us a first look at an even more exclusive version of the already impossible-to-get watch, made of solid 18 karat rose gold, set off by a bespoke black ceramic bezel.

Barrichello, an icon in the racing world, competed in Formula One between 1993 and 2011, scoring 11 Grand Prix wins and 68 podium finishes. From 2000 to 2005 Barrichello drove for Ferrari as the legendary Michael Schumacher’s teammate, finished as championship runner-up in 2002 and 2004, and holds the world record for most F1 race starts with 322.

With this much impressive racing provenance, there’s a case to be made that this watch, dubbed the “La Barrichello” Gold, could one day be as highly sought-after as the iconic “Paul Newman” Daytona. Its priced at about $78,000 apiece, and only a limited number will be made for collectors worldwide.

The exhibition-style custom caseback and openwork dial reveal a modified Rolex 4130 movement with a matching rose gold rotor. Each part of it was disassembled one by one with an “extreme precision,” then skeletonized and beveled entirely by hand.

“I have always had a thing for the Daytona,” Barrichello says. “My custom timepiece is unparalleled, it bears details that make it as unique as a Formula 1 car, as my own car. A different movement, particular shapes, exceptional curves and an extraordinary mechanism. I love it! Each detail is perfectly executed with the same concern for extreme perfection that we find in the racing world.”

“Artisans de Genève bring an artful personality to the Daytona, changing the character entirely by opening the dial to reveal a newly refinished movement underneath,” notes Rolex expert Blake Buettner, Director of Watches at StockX, the live “bid/ask” marketplace backed by Eminem and Mark Wahlberg where collectors can build luxury watch portfolios.

“As far as Rolex modification goes,” he adds, “Artisans de Genève is in a league of their own both in creativity and execution. Collaborating with the likes of Rubens Barrichello adds a level of distinction that directly reinforces the Daytona’s rich history. These watches may be niche in their appeal, but their utterly unique take on an icon will make them relevant for generations to come.”

You can register your interest in one of these limited editions here, and know that you’re buying an heirloom that also happens to be ridiculously cool.