“This timepiece is part of a unique history between one of the most iconic watches in the world and one of its greatest-ever drivers.” 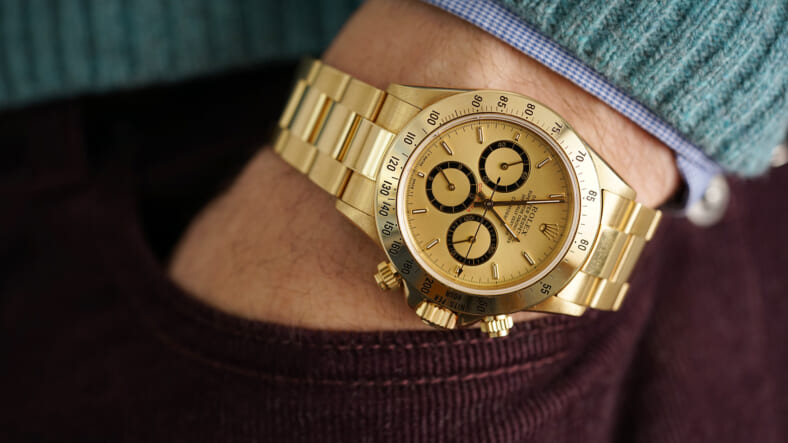 A solid gold Rolex Daytona that F1 legend Ayrton Senna gave to his mentor, bearing a personal inscription from him, is expected to bring in up to $200,000 at Phillips’ The Geneva Watch Auction: NINE at Hôtel La Réserve on May 11-12.

The watch was gifted by the driving legend to Angelo Parrilla, the man who “discovered” his driving prowess and helped launch a career that culminated in three Formula One world championships before Senna’s untimely death in 1994.

The watch comes with an F1 helmet face shield signed by Senna and dated 1988, adding to its value. Widely considered one of the greatest Formula One drivers of all time, Senna was the subject of an award-winning documentary in 2010 and remains a hero of motorsports enthusiasts everywhere.

The watch, a “floating dial” ref. 16528, the earliest iteration of Rolex’s first automatic gold Daytona, is inscribed “A Angelo da Ayrton 1978” (to Angelo from Ayrton). As Phillips notes, “This timepiece spans more than horology – it is part of a unique history between one of the most iconic watches in the world, the sport that the Daytona is synonymous for and one of its greatest ever drivers.”

Daytonas have long been awarded to winning drivers in some of racing’s most high-profile competitions. Senna once named Parrilla as the greatest driver he ever raced against, and their history dated back to his early years racing go-karts, a time Senna always treasured because it was about “pure driving pleasure with no politics and no money involved,” Phillips notes.

The watch would be highly collectable even without the celebrity provenance and we think Phillips’ estimate is if anything on the low side. Which shouldn’t discourage you from bidding if you’re in the market for a timepiece of this magnitude.