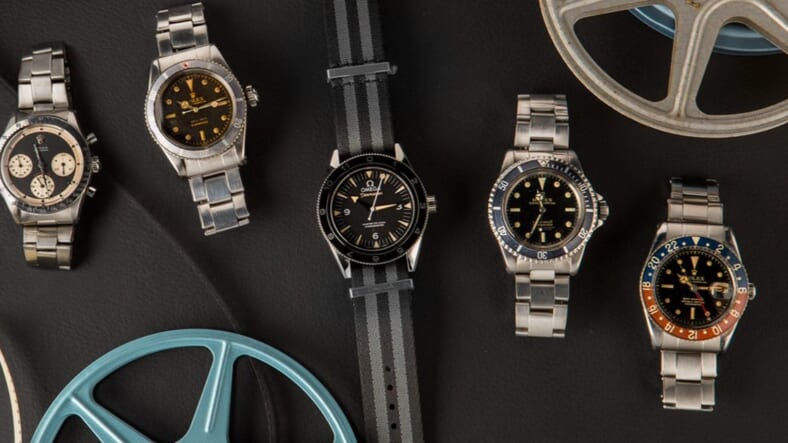 The vintage Rolex specialists at Bob’s Watches are offering deep-pocketed collectors a chance to snap up five historic watches immortalized by Sean Connery, Paul Newman, Daniel Craig, and Steve McQueen in a landmark auction this week.

The latest in the company’s “Fresh Finds” series, the “Iconic Watches of Hollywood” event runs from November 16 through November 23. If you happen to be in the market for an investment timepiece that’s certain to increase in value over time, here’s a look at the five sought-after watches on the auction block.

Famously worn by actor and race car driver Paul Newman in his personal life, the so-called “Paul Newman” Rolex Daytona is widely hailed as the world’s single most famous vintage watch. These coveted chronographs are the ultimate grail item for Rollie aficionados, who might tell you that only about 1 in 20 Daytonas were originally produced with this signature Art Deco-style font on the dial.

The original “James Bond Submariner” appeared on Sean Connery’s wrist during the very first James Bond film, 1962’s Dr. No. It’s also the model responsible for the ongoing James Bond/Rolex Submariner brand association. Legend has it that the actual watch worn in Dr. No originally belonged to Bond movie producer, Albert “Cubby” Broccoli, who loaned the watch to Connery when a Rolex was needed on short notice.

While 007 wore a Rolex Submariner in 1964’s Goldfinger, a watch worn in the same Bond movie is equally thirsted after by collectors. Known as the “Pussy Galore” after it was worn by the cheekily-monikered character portrayed by Honor Blackman, the Rolex GMT-Master ref. 6542 is considered among the rarest GMT watches of all time.

Few film icons enjoy an association with vintage watches deeper than Steve McQueen, so it’s only natural that “The King of Cool” is inextricably linked to a sweet signature Rolex. McQueen’s personal stainless steel Submariner was worn in films like 1974’s The Towering Inferno and 1980s The Hunter. While McQueen’s Submariner fetched $234,000 back in 2009 (and has skyrocketed in value ever since), this pristine example of the model popularized by him is practically a steal with a starting bid of $29,000.

Omega has been the official watch brand of 007 since 1995, and among the most striking examples is the dive watch worn by Daniel Craig in 2015’s Spectre. The watch itself is a modern upgrade of the brand’s very first diver from 1957 and is handsomely tricked out with a retro-inspired lollipop seconds hand and a 12-hour bezel crafted from black ceramic.