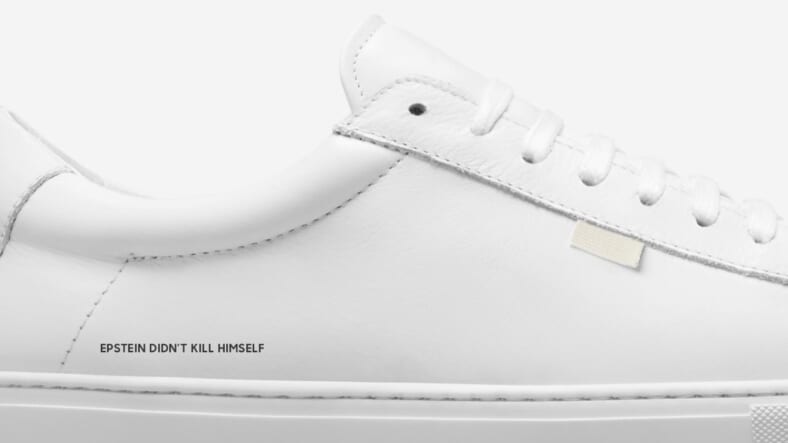 For that select segment of sneaker collectors who are fascinated with the sordid case of Jeffrey Epstein–the wealthy financier accused of trafficking underage girls before allegedly killing himself in his jail cell last year while awaiting trial–have we got a pair of kicks for you.

Epstein’s headline-grabbing death in a Manhattan lockup last August was officially ruled a suicide, but many skeptics, notably including comedian and podcaster Joe Rogan, believe Epstein was killed because he had damaging secrets on powerful pals ranging from former President Bill Clinton to Britain’s Prince Andrew.

Footwear brand Oliver Cabell is capitalizing on the “Epstein Didn’t Kill Himself” meme by making a limited run of sneakers with “Epstein Didn’t Kill Himself” printed on them. The clean white kicks are a riff on the brand’s Low 1 style, with no logo on heel or tongue and an off-white ribbon added near the eyelets, in addition to the tiny Epstein text. Only 100 pairs will be made, which can be pre-ordered now for $198.

“We thought it would be funny to create a release dedicated to the Epstein meme that has skyrocketed in popularity,” said Oliver Cabell founder Scott Gabrielson. “What isn’t funny is that the rich do enjoy a separate justice system than the rest of us. The idea that Epstein killed himself smells fishy to me.”

Whatever you believe, Oliver Cabell says it will donate 20 percent of profits from the “Epstein Didn’t Kill Himself” sneakers to the Polaris Project, a nonprofit organization that combats modern-day slavery and human trafficking. But interested buyers will have to wait more than six months to own a pair, as Oliver Cabell isn’t dropping them until August 10, 2020–exactly one year to the day since Epstein’s death.