KAOS just might be Sin City’s most decadent day club. 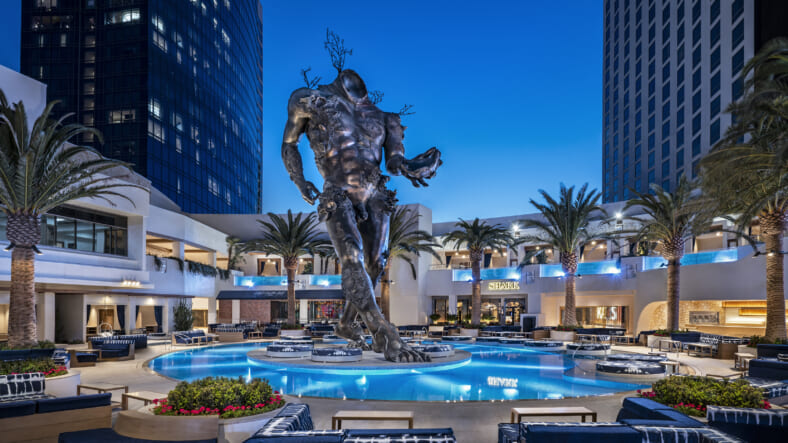 The Palms Casino Resort in Las Vegas is opening the doors to its lavish new party palace KAOS as part of the hotel’s $690 million renovation.

The multi-level dayclub was designed by Friedmutter Group Las Vegas and has two main pools, multiple side pools, and 39 cabanas that many of which have their own private pool.

The nightclub was designed by Rockwell Group — which also designed some of the remodels of the suites at the Palms, including the basketball-inspired Hardwood Suite.

The focal point of the venue is the massive 60-foot bronze sculpture in one of the main pools from artist Damien Hirst titled Demon with Bowl, and another 23-foot tall sculpture from Hirst titled The Warrior and the Bear, personalized champagne valet service, a Tesla coil ceiling, water cannons, and the largest retail displays of the Macallan Fine & Rare Collection all make this club just as extra as you’d expect.

The club is also offering an insane $1 million weekend package called KAOS Theory, which includes multiple rare large format bottles of Ace of Spades and Dom Perignon as well as a 3-night stay in the Empathy Suite — a.k.a. The most expensive suite in the world at $100,000 per night with a two-night minimum.

KAOS officially opens April 4th, and the opening weekend will feature performances from artists including Alicia Keys, Marshmello, Cardi B, and Travis Scott.