The Air Force veteran reportedly fell to the floor when he realized the watch’s value. 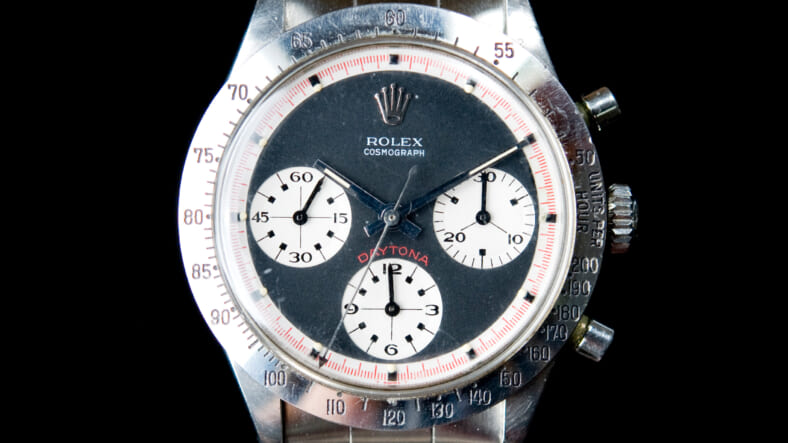 It pays to take good care of your stuff, sometimes—you never know how well it might age. An unnamed Air Force veteran took his Rolex Daytona Paul Newman, purchased while stationed in Thailand in the 1970s, to an Antiques Roadshow taping and he discovered they appreciate at an incredible rate.

Via Hodinkee we learn he paid just over $345 USD when he bought the Rollie, which he planned to wear as a dive watch. He decided it was too nice and it ended up unworn and locked away in a safe deposit box with all its papers. Today, according to the Roadshow appraiser, it could be worth as much as $700,000.

Of course, we know Rolexes age well now. They were always luxury watches, but perhaps much more affordable to folks making middle income 40-45 years ago.

Hodinkee recorded the man’s response to learning that his Rolex could go for a minimum of $500,000:

When the appraiser told him that a watch like his could expect to earn $400,000 at auction, he fell to the ground. But that’s not all. The appraiser added that since the watch was unworn and still had all of its documentation, and even the sticker on its back, he could expect it to sell for $500,000 to $700,000, just as long as it remains unworn.

The site also noted a quote from Rolex specialist and Hodinkee founder Ben Clymer, who said that the “Rolex Cosmograph Oyster Reference 6263 (…) is the most desired, most beautiful, and most expensive standard Paul Newman Daytona around.”

The Air Force vet, who appears to be the bearded gentleman bleeped at the end of the Antiques Roadshow spot above, must be really glad he decided his watch was just too fancy to wear with SCUBA gear.

Find out more when this new episode of Antiques Roadshow airs on January 27 on PBS.