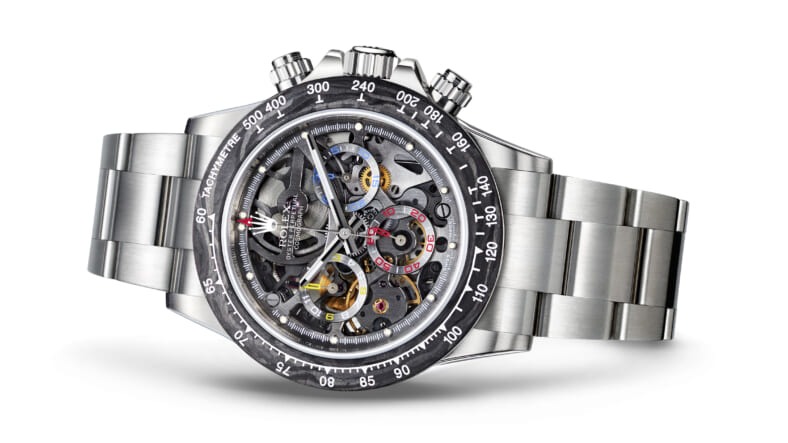 You could say Colombian race car driver Juan Pablo Montoya is a fan of the Rolex Daytona. He has “seven or eight” of them in his watch drawer, including the three he was given for winning the legendary 24 Hours of Daytona in 2007, 2008 and 2013.

So when he decided to collaborate with Swiss Rolex customizer Artisans de Genève on a unique sports watch, it wasn’t hard to decide which model to base it on.

How to do something completely different however to an iconic watch that’s been altered in every conceivable way over the years?

The answer was to give it a see-through or skeleton dial, which no one has ever attempted before. The prototype was so successful the company is now offering a limited edition of 50 examples for about $48,000 each. The La Montoya, as it’s called, took two full years to develop.

Every minute piece of Rolex’s Caliber 4130 movement was dismantled, refinished and angled so it could be put on display behind a polished piece of sapphire. Artisans de Genève also added its signature solid 22k gold rotor, polished with a circular finish.

Speaking of polishing, the La Montoya Daytona also gets ADG’s patented dual finish, a mix of brushing and sandblasting on the case and lugs.

The watch also sports a new forged carbon bezel setting off custom touches on the dial such as a sandblasted red arrow chrono hand, specially shaped counter hands, and sub-dial numerals hand-painted in the Colombian colors of blue, yellow and red – the ones Montoya was sporting when he won the Monaco Grand Prix in 2003.

This is a massively cool watch that was hard to get hold of even before Artisans de Genève turned it into something that’s never been done before. Rolex for some reason never lets its admittedly beautiful movements be visible on its own designs, so in a sense this see-through Daytona was only a (ahem) matter of time.