You Can Now Own Steve McQueen’s Rolex Submariner

“The King of Cool” even inscribed it with a personal note to his stuntman. 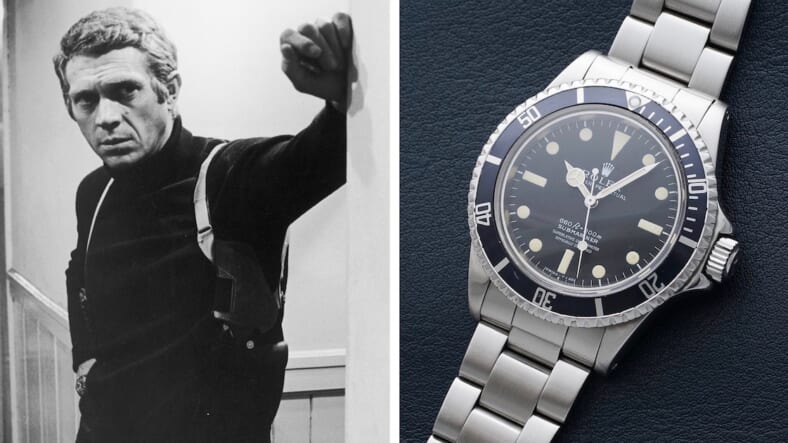 A vintage Rolex Submariner once owned by legendary actor Steve McQueen, is going up for auction at Phillips in New York City.

The watch collection of the late movie star is the stuff of legend, but the provenance of this particular timepiece is even more extraordinary.

It was actually gifted by McQueen to his longtime stunt double Loren Janes, who stood in for McQueen in 19 of his 27 movies.

Before his death in 2017, he was one of the most prolific stuntmen in Hollywood, eventually co-founding the Stuntmen’s Association of Motion Pictures.

On the caseback is an inscription McQueen left for his dear friend: TO LOREN, THE BEST DAMN STUNTMAN IN THE WORLD. STEVE

Look a bit closer into the wedge between the bracelet clasp and on the caseback, and you’ll find remnants of soot.

The watch was actually once believed to have been destroyed in a fire. Janes’ home was among the eighteen buildings destroyed in a 2016 California wildfire, known as the Sand Fire.

It was only later discovered after Loren and his wife were encouraged to return to the site of the blaze in order to find the watch. Miraculously, it had survived and was sent to Rolex U.S.A. to be examined and restored.

The timepiece will be sold along with a letter of authenticity signed by Loren Janes, a photo book including images of Steve McQueen wearing the watch and an additional Rolex Submariner glossy/gilt dial and hand set.