Why These 3 Modern Rolexes Are Rising In Value

Because some things only get better with age. 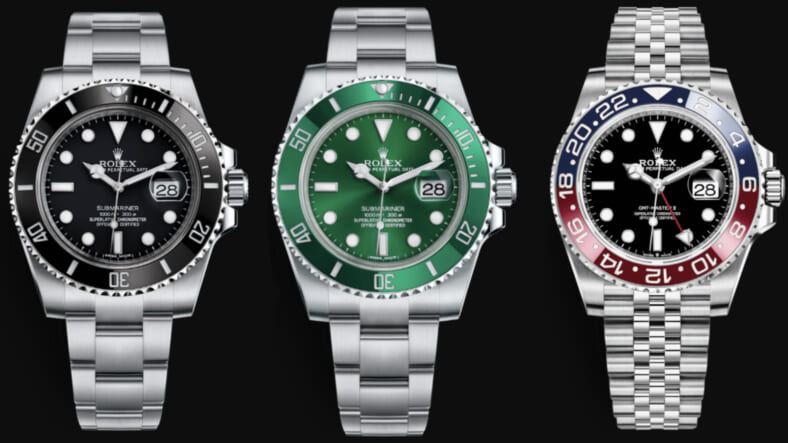 Rolexes tend to be at the top of many watch collectors‘ wish lists, as they appreciate so well in value. Consider what a good investment a standard Rolex of any kind that’s still being made might be, then take a look at these discontinued models.

For collectors, these increasingly rare timepieces are becoming more valuable by the day, writes David Farkas for Hypebeast. Here’s more:

Discontinued models, however, are becoming increasingly collectible, with collectors now categorizing characteristics of certain discontinued models in the same way they would with vintage Rolexes.

There are three discontinued models in particular that collectors should turn their attention to: the Submariner 50th Anniversary reference 16610LV (aka the “Kermit”), the Sea-Dweller Ceramic 40mm ref. 116600 and the GMT Master II ref. 16710.

These aren’t the only discontinued Rollies around, of course, so Farkas—a Rolex expert and the founder of Swiss Watch Time—goes on to detail what’s special about them.

The “Kermit” Rolex Submariner, as it’s sometimes called, was first revealed in 2003. It was created to commemorate the 50th anniversary of the model, according to Hypebeast. With this discontinued model, it’s really all about that distinctive green bezel. David Farkas writes that this “model has what is referred to as a ‘flat 4’ bezel. The bezel has a lighter shade of green found exclusively on Y serial production models, up to Y9xxxxx.”

That “flat 4 bezel,” according to Farkas, “refers to the number 40 found on the bezel insert, where the top of the “4” has a flat edge as opposed to the pointed top found on later models.” It’s an almost invisible difference, but Farkas writes that it “translates to a substantial premium in terms of value.”

Flat 4s are apparently rare because owners “have sent their watches to Rolex for servicing. Unfortunately, because Rolex no longer manufactures flat 4 inserts.” There’s been a gradual reduction then of this particular kind of “Kermit,” which has increased the 16610LV’s value. Farkas advises that if you happen to have one of those Rolex Submariner 50th Anniversary models, “be sure to request that the original bezel not be replaced.”

According to Hypebeast, the 16710 came in three versions, the Black, Coke (red-black) and Pepsi (red-blue). He details some of the issues in watch creation that affect value today—for example, the “late series ref.16710s with the so-called ‘error dials’ have the II printed in sans-serif instead of serif, adding a slight premium of around $1,000 USD”—and concludes that “GMT Master II ref.16710 will only continue to increase in value.”

“Specifically,” writes David Farkas, “the Coke and Pepsi examples may see notable appreciation as they seem to be more desirable than the new ref.116710 and 126710 models. The color on the ref.16710 bezel inserts is brighter and provides for a greater wrist presence.” At Paul Altieri‘s Bob’s Watches, the GMT Master II ref. 16710 ranges in price from $10,295 to $13,495.

Again, it’s about scarcity. Farkas writes, “Rolex Sea-Dweller Ceramic 40mm ref.116600 had the shortest production run of all modern Rolexes. It was introduced in March 2014, available from retailers in 2015 and officially discontinued in the first quarter of 2017.”

While the Sea-Dweller Ceramic certainly has unique features like a matte (as opposed to glossy) dial, David Farkas states that the “116600’s two-year production cycle is what makes it not only unique, but valuable. Since it was discontinued, ref.116600 values have risen by about 33%.” Online reference Watch Charts gives a current price range of $11,237.00 to $12,853.00.