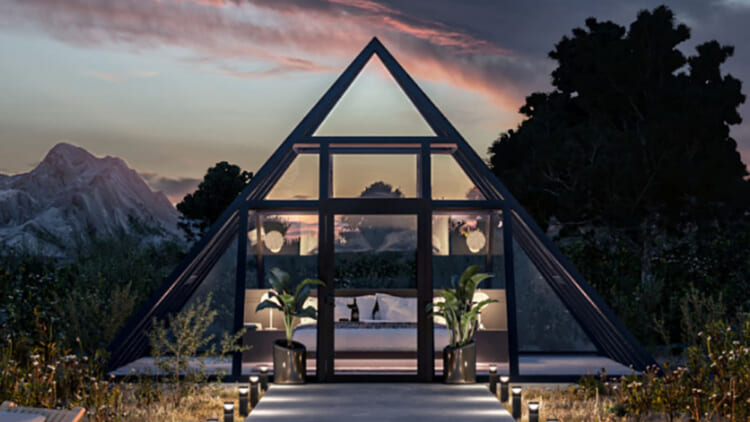 If there really are aliens zipping around the Earth in blobby, Tic-Tac-like ships, we’ve got the place they should go if they want to chill from baiting Navy pilots — the otherworldly-looking Nomad’s Pad, located near the south rim of the Grand Canyon.

This stylish 20 acres or so is set to be home to 10 glass pyramids equipped with temperature controls and smart glass technology that can render the pyramids opaque when you’re done looking at the stunning night sky — the kind of surreally beautiful vision of the stars you can only get in the desert southwest.

According to The Robb Report, Nomad’s Pad is a “solar-powered project–which recently met its fundraising goals on Indiegogo” and it “plans to offer guests their own 400 square-foot, comforts-filled glass pyramid for one to three nights of luxurious camping.”

Having just 10 pyramids spaced a healthy distance apart will allow for complete 360-degree views, at least until guests engage the smart glass when it’s time to hit the sack.

Constructed with passive house principles for maximum efficiency, each pyramid will come with air conditioning, a queen-sized bed, luxury linens, a detached private bathroom and shower, eco-friendly toiletries and complimentary tea and coffee. Cushy outdoor amenities include a private hot tub, propane fire pit, a hammock and a private patio decked out with lounge furniture.

Before anyone starts looking for a link to make reservations, note that this is in the “concept” stage at the moment, though blasting through their funding goal likely sped up making it a reality.

The folks behind Nomad’s Pad state in their Indiegogo listing that guests will “become part of the Wild West. Hear birds chirping in the morning, coyotes howling at night, and the whistle of the wind blowing. Smell the fresh aroma of Pinyon Trees and Juniper Berries—like a refreshing glass of gin without the bite, just pure nature.”

It sounds almost as intoxicating as good gin, minus the risk of a hangover later.

If you want to add your support and get in line to stay at Nomad’s Pad when the project is complete, register with Indiegogo. Perks range from $579 — a one-night stay — to three nights at $1,659.

Nomad’s Pad expects to be in operation by October 2021. There probably won’t be actual extraterrestrial travelers staying in the pyramid next to you, but with such amazing views of the night sky, there’s a good chance you might see some flying by.