“I can have opinions about feminism and also do sexy photo shoots.” 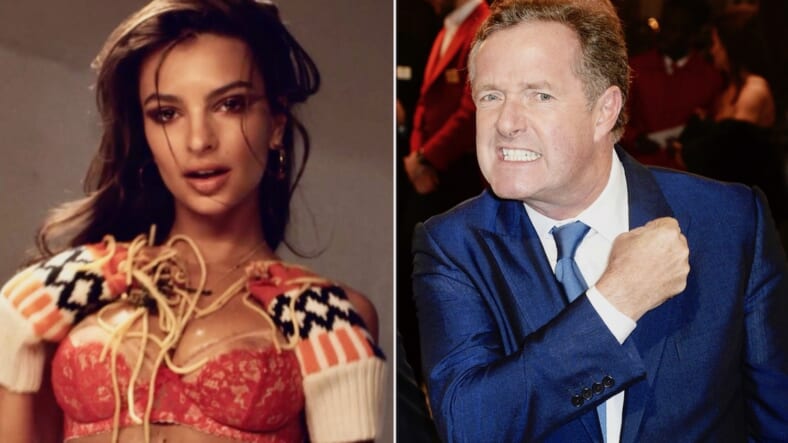 Emily Ratajkowski is in yet another row with British TV presenter Piers Morgan: this time, over her provocative, pasta-soaked video for the LOVE advent calendar.

The 26-year-old model clapped back at his recent tirade on Good Morning Britain, where he ranted that she is co-opting the term “feminism” to advance her career and that she is a “global bimbo,” among other digs.

Lol never said my love video was a feminist statement. But now it’s worth saying that telling women what to do with their bodies & sexuality is actually just classic sexism. I️ can have opinions about feminism & also do sexy photo shoots k thanks

Piers claimed his anger wasn’t at the sexualized nature of the photo shoot itself but rather Ratajkowski’s supposed claims that rolling around in pasta while wearing lingerie is a feminist act.

My problem with this is the way that people like Emily and Kim Kardashian and others… they strip off all the time, they post this stuff to millions and millions of impressionable young women, and they don’t just say, ‘Hey, don’t I look hot?’ and let people make their own judgements; they say, ‘I’m doing this to empower women and to promote feminism,’ which makes every young woman in the world who follows them… think this is the way to get on in life.

During the release of the teaser for the LOVE advent calendar, Ratajkowski said in a statement that participating in racy photo shoots doesn’t jeopardize her feminism.

“In the wake of women coming forward with incredible amounts of sexual harassment cases, I have been so disappointed to hear women talk about ‘modesty’ and ‘our responsibility’ as if we need to, yet again, adjust to make it ‘easier’ for the rest of the world. I’m tired of having to consider how I might be perceived by men if I wear a short skirt or post a sexy Instagram. I want to do what I want to do.”

Ratajkowski claims said pasta video wasn’t necessarily a “feminist act. Rather, it’s her choice as a woman to participate in a sexy photo shoot without people telling her to cover up for the sake of modesty, like Piers.

It’s not the first time these titans have clashed. Back in 2016 when her nude horseback Harper’s Bazaar cover dropped, Piers threw some shade at Ratajkowski on Twitter, to which responded with another dig.

thanks, but I don't need clothes as much as you need press.

Who’s side are you on?