Looks like this wild hog didn’t want to pose for a selfie. 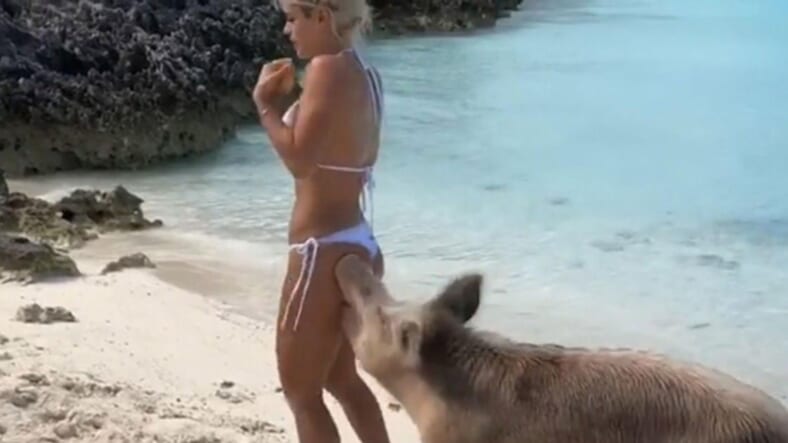 Michelle Lewin found out firsthand just how wild island pigs can be while on a bikini-clad photo shoot in the Bahamas.

The Venezuelan fitness influencer was posing on the sandy beaches of Big Major Cay in Exuma, a remote area that’s famous for its lush tropical views and a population of feral swine.

You may recall seeing top models including Chanel Iman and Shanina Shaik playing with Bahamian hogs at “Pig Beach” in the star-studded commercial for the doomed Fyre Festival that went viral last year. But when Lewin tried to stage a similar scene, things didn’t go quite as smoothly.

In the video above, the toned beauty can be heard shrieking in Spanish after a particularly large female pig chomps on her behind. When she tries to run away, a rambunctious piglet pursues.

The second part of the clip shows all the cheeky aftermath—visible red marks on Lewin’s rear end.

It wasn’t all for naught, though. People reports that Lewin  successfully frolicked with the porcine critters while swimming through the island paradise’s crystal clear waters in videos posted to her Instagram story.

“I don’t like going to that island to see those pigs cause they really, really will bite you,” Iman recently told People. “If you see the Hulu documentary, I am like running, I am jumping in the boat because I don’t want anything to do with getting bit or getting hurt by the pigs.”

“I know a lot of the girls are picking up the pigs, holding them, but like it just wasn’t something that I wanted to do,” she added.

If you’re planning on visiting Big Major Cay’s Pig Beach, you might want to heed this warning from travel reviewer The Points Guy.

“Some are feisty enough to bite your behind if they think you’re not feeding them.”