Warm up those thumbs. 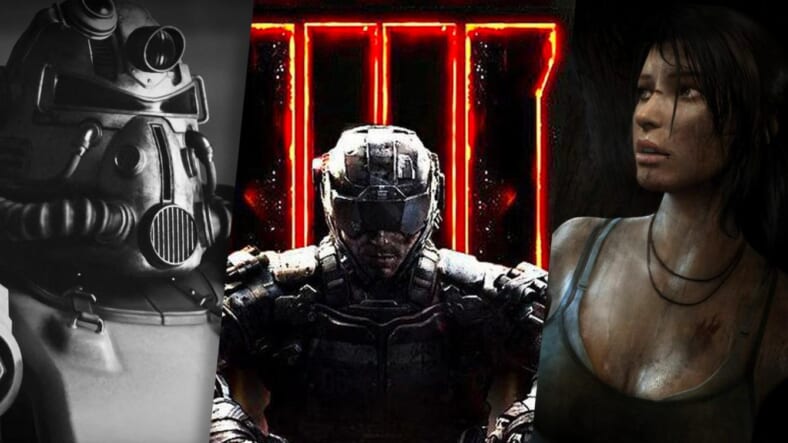 The world’s biggest video game conference, E3, is officially wrapped for 2018, and publishers have thrown down the gauntlet, unleashing the titles that will capture your heart, thumbs and wallet for the next year and beyond.

We’re running down the 25 most important games of the show, so you can get a taste of them all in one place.

The upcoming Spider-Man game may not feature Tom Holland, but that’s pretty much the only criticism we can level at it. The build we played at E3 was nothing short of amazing, with a hugely detailed version of Manhattan for Spidey to swing around and save. This is, hands down, the best looking, best feeling Spider-Man game we’ve ever played, and we’re excited to know it’s coming right after the summer.

EA pulled the curtain back on their new version of Madden for this year and it’s looking like a must-own annual edition, due to largely to a new locomotion system and a slew of details getting honed, polished or overhauled. This is not a Madden year that’s relying on roster updates to sell copies. Expect Madden 19 to genuinely feel different when it comes out in August.

3. Shadow of the Tomb Raider

The third game in the reboot of the classic series, Shadow of the Tomb Raider continues to push the new-and-improved Lara Croft into challenging positions on her globe trotting adventures. Lara’s recent outings have all had a renewed sense of grittiness to them, from her own reluctance at becoming what she was meant to be to brutal death sequences that elicit gut reactions. Shadow of the Tomb Raider is set to give fans even more of what they’ve come to love from Lara’s latest adventures.

Taking the arcade racing formula to the streets of the UK, Forza Horizon 4 is parlaying off of its predecessor’s huge active community, and expectations have never been higher. The car list is chock full of supercars, the world is enormous and wildly diverse, the addition of dynamic seasons that will change from week to week are set to add an entirely new element to the game and a new emphasis on keeping the world populated with other real players (while taking steps to make sure griefers are held at bay) may make Forza Horizon 4 the racing game to own whether you’re a newcomer to the series or a long-time fan.

The Assassin’s Creed series continues to globe trot and time hop. Taking place in the thick of ancient Greek civilization, Odyssey lets you play through a rivalry between Greek city-states like Athens and Sparta as either a male or female protagonist, a very equal-opportunity change to the series and one that we hope plays out beyond our demo of the game. We were happy to see that Ubisoft had taken time away from AC in order to fix some of its problems but it appears we’re back on an annual release schedule again and we’re hopeful that Odyssey is held to the same high standard as last year’s AC: Origins.

After returning to World War II in last year’s Call of Duty, we weren’t sure of what to expect from Black Ops 4; would Activision try and revamp one of their best selling recurring releases or give us more of the same? The answer is that Black Ops 4 looks and plays exactly the way you’d a Black Ops game to play, futuristic war tech, tight gunplay and a story that would be right at home on a movie theater screen, Call of Duty: Black Ops 4 is giving fans plenty of good reasons to renew their love of COD in 2018.

A surprising take on space-based, sci-fi dogfighting, Starlink was an unusual game of the show that fully captivated us through our hands-on demo. Challenging and addictive, the presentation of going from outer space to on-planet missions had us howling as we took our rocket ship into an alien melee and pounded ETs with guns and missiles. Starlink harkens back to a time when the majority of games put you in the cockpit of a spaceship. Now that games have seemed to move past that, Starlink feels like a unique and innovative approach to a genre that deserves some modern love.

EA’s bread and butter franchise is moving forward in history from last year’s WWI outing. Planted once again in WWII, the game has been painted as historically inaccurate as a result of its new inclusion of women in the war. It’s a bullshit point to make. Let’s be honest, if you’re looking for historical accuracy, the BF series is probably not your cup of tea. We play Battlefield for its huge online multiplayer matches and BFV will definitely deliver on that promise, regardless of whether you intend to play as a man or a woman.

New vault, new experience. The aftermath of the apocalypse looks mighty enticing in Fallout 76 where a new take on the franchise’s gameplay awaits. This one looks good, but we’re concerned about how the shared world element might play out given the malcontents who’ll likely populate the game with you.

Nintendo’s play to bring the Pokemon Go formula to console borrows equally from the mobile game and the traditional Pokemon experience. We know there’s a core Pokemon RPG coming in 2019 but this strategy aims to fold the casual players into the fray and prep them for the bigger experience that’s on the horizon for them as Pokemon fans.

Turning the utterly ridiculous into a fine art, Just Cause 4 is giving gamers even more freedom to create chaos while they attempt to free a South American-ish country from the grip of a private army. The devs behind the game were particularly proud of the dynamic natural elements of the game and how taking on similar situations over and over will yield new results every time. The moment we can ride a gas tank in a way that would make Dr. Strangelove jealous is the moment we give serious props to a game.

The biggest roster, the most stages, meaningful tweaks to the game mechanics, Super Smash Bros. Ultimate is guaranteed to be a hit when it launches this December. If our time with Ultimate is any indication, we need to go into training so we don’t get our asses kicked

People have been waiting for this game for a comically long time. We’re not expecting the story to knock our socks off, but the wide range of moments and the huge cast of iconic Disney characters means that Kingdom Hearts 3 will undoubtedly be a blast to play even if the story doesn’t actually make much sense.

One of the only remakes of E3, RE2 getting a makeover is a huge deal for fans of the horror game. Gameplay is largely identical to the original but the look is completely updated and looks sick. Gore never looked so good.

The madmen behind Trials have given us all a new reason to look forward to the dirt bike racing of the Trials series. It’s not just more of the same but new co-op modes and an announced Switch version are punching out the Trials series to new heights.

We’re fully expecting EA to fuck this up on launch but, for now, Anthem’s mech-fighting adventure looks damn good. If the co-op online gameplay remains as tight as it looked in the demo EA showed off — and they don’t screw it up with loot — then Anthem may be one of the biggest games of 2019.

This cool looking new IP from Activision breathes new life into the ninja genre. Armed with a bionic arm and some serious skills, Sekiro is set to be a supreme challenge of a video game when it comes out next year.

DMC5 has been a long time coming and took us by surprise when it was announced at E3. Much is still yet to be seen about whether the new game will opt for the OG gameplay that had gamers hacking and slashing through each level, but DMC5 is guaranteed to continue the story that left off so long ago.

We never thought we’d be so happy to see the name Fenix show up again, but Xbox pulled out the stops with this one, giving us more details on a new Gears game than we expected, hinting at a deep and complex story AND showing off a serious chunk of gameplay.

The highly stylized consumer-topia of Cyberpunk 2077 looked like it might give Ready Player One a run for its money. Much remains to be seen about CD Projekt Red’s latest venture, but confirmation that there’s more depth here than in the extremely complex Witcher 3 has us expecting an RPG of epic proportions.

Little more than a teaser, Halo Infinite’s promise of the next chapter in Master Chief’s was more than enough to elicit a huge crowd reaction. We might point out that the rhino stampede in the trailer looks pretty janky to us, but the moment Chief’s helmet hits the screen, nothing else mattered.

Justin Roiland’s obsession with VR, dirty jokes and characters that were pulled from a Dr. Seuss fever dream are all coming together in Tover Saves the Universe, a traditional hack and slash platforming game that features Roiland’s familiar voice-acting (he voices both Rick and Morty) as well as the promise of a much bigger, always-hilarious cast. Even when Tover was berating us during our demo, we couldn’t help but crack up. Easily one of the most off-beat games of the entire show, we’ll be keeping a particular eye on Squanch Games’ offerings as long as Roiland’s mad genius is at the helm.

The Sony exclusive sequel has game of the year potential all over it. Which year remains to be seen but what we saw of TLoU2 looks lightyears ahead of other games in terms of how it’s going to handle the in-your-face moments that are a hallmark of this survival story. This is also a banner title for Sony, so expect the graphics to be off the charts by making use of the PS4Pro hardware in completely new ways.

Like playing through a Kurosawa film, Ghost of Tsushima is going to be an ode to all things samurai, but with a heavy dose of guilt and death thrown in. While the story looks promising, it’s the swordplay here that’s proving to be the draw for us, requiring true skill and technique if you expect to survive the dangerous world of feudal Japan.

We don’t know when it’s coming out, and we’re still largely unsure of what it’s actually about, but Hideo Kojima’s new studio’s first game is sure to be a mindfuck of Hollywood proportions. It has a plot that features time paradoxes and a cast that draws on some of our favorite actors from recent Bond films, but we’ll probably have to wait for next year’s E3 before we get any more concrete details. (And we might be saying that same thing again next year if Kojima’s unrushed process of making games continues.)