Which one are you most psyched for? 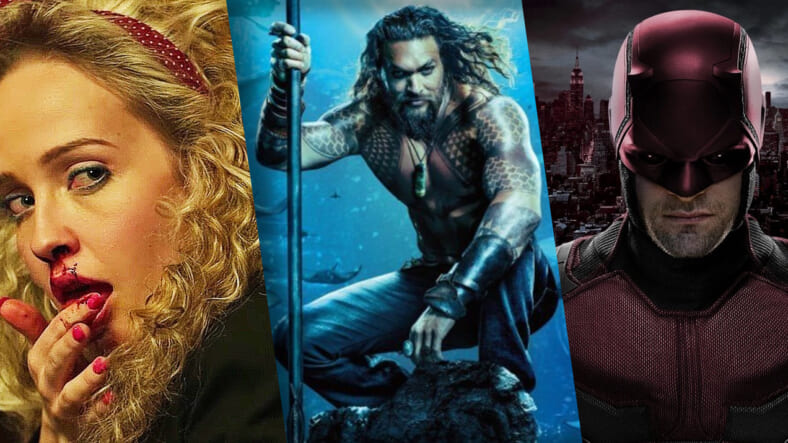 New York Comic Con has drawn to a close, but not without dropping a bunch of trailers and sneak peeks of some of the biggest movies and TV shows coming soon. Here, geek out on all the best upcoming superhero, sci-fi and fantasy trailers that debuted at the beloved annual nerdfest.

DC’s cinematic universe has fallen flat for fans lately so there’s a lot of pressure for the Aquaman flick to be more Wonder Woman and less Watchmen. This five minute trailer feels more like the former. If Aquaman hits and DC does right with the upcoming Joachin Phoenix Joker movie, DC could have the comeback they’ve been hoping for.

It’s a horror movie with Nazi zombies that looks damn fun. It’s just a shame this one isn’t coming out in time for Halloween.

This animated offshoot is bringing together lots of Spider-Man lore, a great looking style and a fantastic voice cast. If the name John Mulaney is unfamiliar, fix that. Fast.

Peter Jackson’s latest epic adapts the novel about huge rolling cities to the silver screen. Expect a direct translation of the source material and a huge CGI budget as the guy behind the Lord of the Rings trilogy brings this one to life.

Get a first glimpse of Spock (with beard!) in this trailer. Trekkies and sci-fi fans are eager for more in the adventures of Star Fleet.

DC’s TV series have had a bit more success than some of their movies and fans of Barry Allen’s Flash are set to get more speedy thrills when the cult-hit returns for its fifth season.

A highly-stylized take on a high school for assassins and murderers, the bro team who directed Avengers Infinity War are executive producing this series and that’s more than a good enough reason to check it out.

Moving from a Christmas to an Easter setting, a maniacal Christopher Meloni returns with elderly brawls and psycho bunnies for Happy’s second season.

A tongue-in-cheek, British approach to an angel and a demon’s unlikely friendship, quality acting and an anything-can-happen premise sets the stage for this new Amazon series.

Superheroes meet hipsters when this group of miscreants set out to take down the so-called heroes who use their powers not just for good but personal gain, fame and fortune.

Three haunting, modern retellings of classic fables, imagined as thrillers set in NYC make up this CBS original. High-concept and high-risk, there’s also high hopes that Tell Me a Story can bring some much needed shocks to the 2019 lineup.

The Devil of Hell’s Kitchen gets a mysterious new plot that brings back characters like Kingpin and may even introduce some new masked faces into the continuing plot of everyone’s favorite Defender.

More TV from DC, this series snags the Teen Titans and puts them into a live-action scenario. There are some beloved characters to follow here and see if they make it into the wider DC movie universe.

Neil Gaiman’s story of a world where gods fight each other for power and attention ramps up for a second season, hopefully with the same complexity and finesse that made its freshman season so great.

Well into the realm of the absurd, this horror-comedy with the cult following returns on Halloween, filling a void for those who won’t be dressing up as a sexy nurse this year.