Bite Club: How to Make Biscuits and Sausage Gravy

This is extremely easy. We promise. 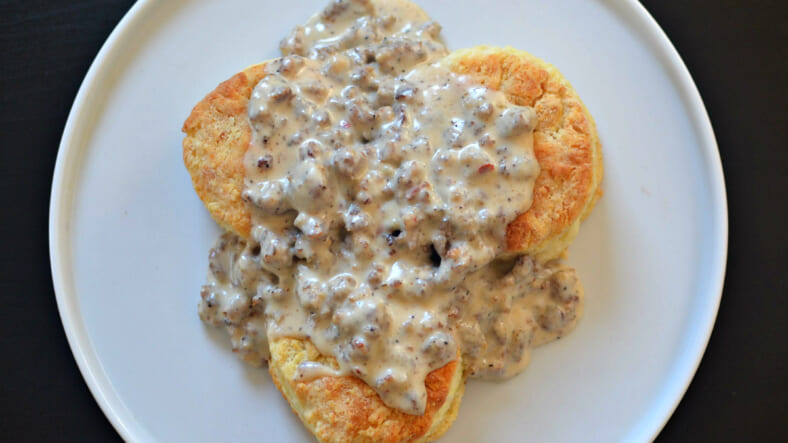 If you ever need a quick self-esteem boost and also feel like taking a bunch of animal fat straight to the dome, making biscuits and gravy is the way to go. It’s stupid easy. It’s like when you switch to rookie mode on Madden and start running up triple digit score lines, except you never get bored, you get to eat a bunch of biscuits, and you’re also not a grown-ass man trying to scrounge for self-worth by beating up on the AI equivalent of a five-year-old.

Start by, I don’t know, making biscuits or something. That seems like a reasonable jumping off point. I’m pretty all this comes from an Alton Brown recipe, because he’s the based god of home cooking for morons, but I’ve added some personal tweaks along the way. Like one time I didn’t have any shortening so I used butter and decided that was a thing I should do. Negligence is the mother of invention.

Take ¾ of a stick of butter and put it in the freezer for at least half an hour. Get it real nice and frozen in there, like a butter popsicle. In a big-ass mixing bowl, throw in two cups of flour, ½ teaspoon of salt, 4 teaspoons of baking powder, and ½ teaspoon of baking soda. Maybe throw in some black pepper if you’re feeling it. Or some paprika. You can even get super bougie with it and throw in some herbs de provence. You literally can’t fuck up this recipe.

Cube up your butter popsicle. And make the cubes real tiny — ¼ inch on all sides should do. Anyone who’s ever had Food Network on as ambient noise for thousands of hours knows that you gotta work fast so the butter doesn’t melt. No one knows why. It’s one of those great mysteries of science that we may never figure out, like why the moon has holes in it.

Gently mash the butter cubes into the flour, doing your best to drop your heart rate and cool your palms so as not to melt it. Create a well in the middle for your flour and pour in 1 cup of buttermilk. Mix it up gently. Sweetly. Sensually. Make sex at your dough.

Lay the dough out on a floured surface and very delicately roll it into a one-inch-thick sheet. Cut into rounds using a tasteful stemless wine glass from Ikea, then put them on some sort of pan situation, brush with melted butter, and throw in a 450 degree oven for like 10 minutes, or until golden brown.

I guess the next thing to do is make gravy. Get yourself ¼ lb of some dirty breakfast sausage. You need it to bleed a lot of fat, so don’t get cute and buy turkey sausage. There’s a time and place for poultry. Now is not it. Heat a sauté pan on medium heat, then cook the sausage, breaking it up with a wooden spoon along the way. When it’s nice and browned, add in 1 tablespoon of flour and continue to cook, mixing it in with your sweaty meat for two minutes. Pour in 12 ounces of whole milk, stir that really well, and let it all simmer for a few minutes, or until your desired gravy consistency is reached.

Pour gravy all over the biscuits. Take off your shirt off and lather the ensemble onto your body, allowing little bits of sausage to hang off your chest hair like Christmas tree ornaments. Or eat them. Either way.