New Tracks From Eminem and Dr. Dre Will Be Featured on the Soundtrack to the Rap-Battle Flick ‘Bodied’ 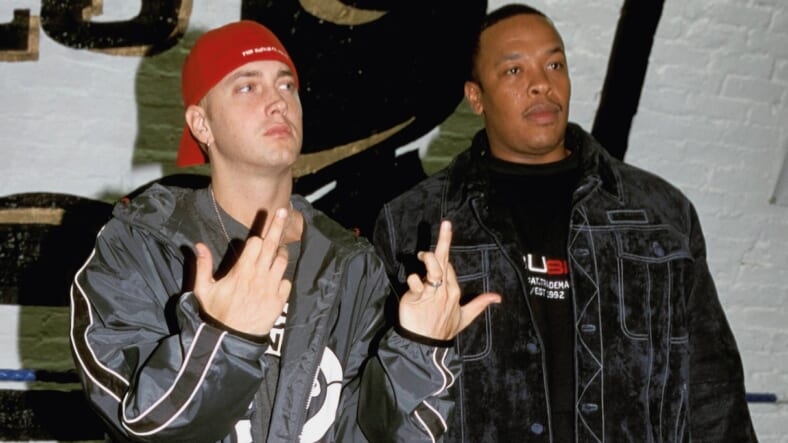 Dr. Dre and Eminem, one of hip-hop’s most commanding duos, are reportedly contributing new tracks to a rap battle satire titled Bodied that recently premiered at the Toronto International Film Festival.

The Hollywood Reporter has further details:

“Eminem and his longtime manager Paul Rosenberg (8 Mile) are putting together a soundtrack for Bodied.”

“The cut that screened at TIFF on Sept. 7 as the opening night Midnight Madness selection didn’t have much in the way of new music, but by the time it’s bought and ready for distribution (ICM is selling worldwide rights), Eminem will contribute a number of songs to the soundtrack.”The pair also has enlisted Dr. Dre for a couple of songs.”

Bodied also boasts Em as a producer. The film’s director, Joseph Khan, has worked with him in the past, notably on the music videos for “Without Me” and “Love the Way You Lie.”

The self-proclaimed rap god’s most recent solo release was the politically charged “Campaign Speech,” which dropped in the fall of 2016.

Rumors have been circulating that the release of the follow-up to the 2013’s The Marshall Mathers LP 2 may arrive in the next few months and will feature Dr. Dre as a guest producer.

While we’re unsure if the notoriously meticulous MC’s latest album really is that close, we can definitely all look forward to hearing his lyrical acrobatics on the Bodied soundtrack very soon.