Rapper Future Gave His 5-Year-Old Son a Gold Rolex, and People Have Opinions

“He ain’t want no damn Rolex, get him some Hot Wheels.” 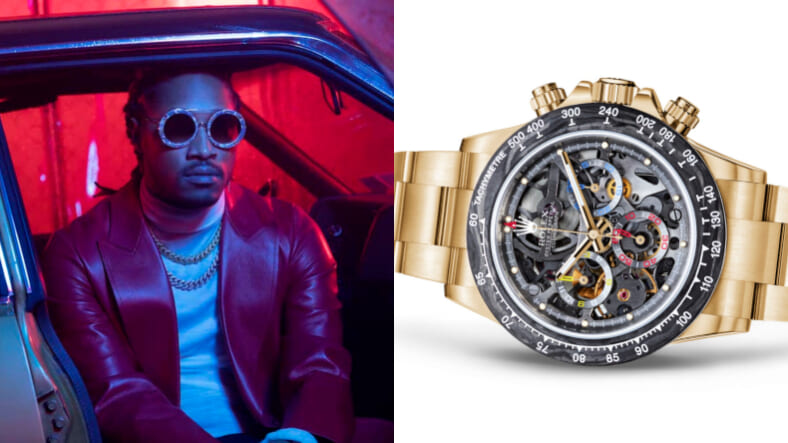 The Atlanta-bred rapper, who headlined the Maxim Big Game Experience on the eve of Super Bowl LIII, posted video of the little guy unboxing a glistening gold Rolex watch at his superhero-themed birthday bash.

Future gifted his son a Rolex for his 5th birthday 👀 pic.twitter.com/UWx3cbTJS2

As Bro Bible notes, the kid hilariously responded by simply muttering the word, “Thanks.”

While Twitter users were busy criticizing The Wizrd hitmaker for giving the youngster such an extravagant present, he went ahead and ‘grammed a swaggy pic of “Baby Future” donning his blingy new bauble.

“Man he ain’t want no damn Rolex, get him some HotWheels,” one commenter wrote. Another accused Future of trying to buy his son’s “love, respect and honor.” Lighten up, Francis.

Man he ain’t want no damn Rolex, get him some HotWheels https://t.co/mbrIspKE3n

What does a 5 y.o need with a Rolex ? Can he even tell time?

But some Twitteratti actually defended Future. One person aptly pointed to the praise DJ Khaled received when he gave his 1-year-old son a diamond-encrusted timepiece valued at $100,000.

It’s Sunday and y’all really hating on Future for getting his son a Rolex?

Maybe you’re mad that baby Future has a rolex because your own dad never bought you one.

People who can’t afford a Rolex talking about what Future should or shouldn’t buy for his family with the money he earned. pic.twitter.com/ffCWruSFWD

Y’all so 2 faced I swear DJ Khalid bought his 1 year old son a Rolex y’all praise him , but future gets his son one and he a useless father 🤔 .. pic.twitter.com/f811GTHNRp

All we know is that when your nickname is Nayvadius Cash and you’ve got $30 million in the bank, a gold Rolex is a drop in the bucket.