“Consider this my public apology to my ‘friends.'” 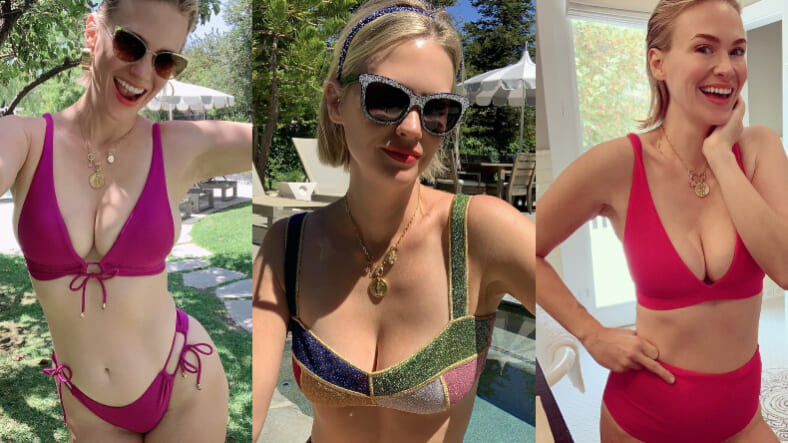 January Jones successfully trolled the National Enquirer for trying to manufacture a story about her allegedly “desperate” Instagram bikini photos—by sharing yet another sultry bikini pic on the ‘Gram.

The 42-year-old Mad Men actress expertly roasted the supermarket tabloid after Enquirer reps reached out for comment regarding an upcoming story that characterized her signature IG thirst traps as a “cry for attention.”

“The National Enquirer is preparing to publish a story which reports January Jones has worried friends with her series of attention-grabbing bikini pictures and social media posts,” a screencap of an email posted by Jones began.

“Sources claim her content smacks of a ‘desperate cry for attention’ and note how her acting work appears to have dried up before the pandemic took hold.”

“Shit,” Jones wrote in the caption. “They’ve discovered my secret. Consider this my public apology to my “friends.'”

She proceeded to hammer her sarcastic point home an hour later, posting a photo of herself in a bright pink high-waisted bikini with her third digit extended. The caption read, “Had to do it. #DESPERATE.”

The New York Post notes that famous followers joined in on the joke. Chrissy Teigen commented, “It was me. I’m worried !!!!!!!!” Diplo added, “You are hot,” to which Jones replied, “@diplo don’t feed the monster.”

Indeed, Jones has been known to crank up the heat with a variety of sexy content, whether she’s modeling swimwear in a selfie or posing in lingerie to raise awareness for breast cancer.

The stunning actress once even jokingly wrote, “Out of work actor needs attention” to accompany a poolside pic of her in an orange two-piece by lemlem, a brand that’s committed to elevating artisanship and expanding production across Africa.