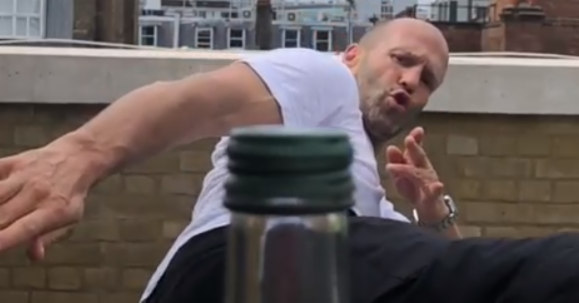 There’s a new viral challenge sweeping the internet, and it’s actually tougher than it looks.

The so-called #bottlecapchallenge has a deceptively simple set-up. All you need is a long-necked glass or plastic bottle with a screw top.

The trick is to ever-so-gently spin the cap off by touching it with the tip of your foot… while throwing a spinning back kick. No big deal, right? But for those without any serious martial arts training, it’s definitely easier said than done.

Holloway’s execution was practically perfect, of course, and he nominated John Mayer. Apparently, the singer-songwriter (and Dead and Co. frontman) understands a thing or two about kicking range.

Mayer then tagged Jason Statham. The Hobbes and Shaw star proved that he can back up his on-screen hand-to-hand combat skills by acing the challenge.

Statham called out Aladdin director Guy Ritchie and retired MMA fighter James Moontasri, both of whom made it look easy. Moontasri even did it while holding a dog.

Conor McGregor also got in on the action. The UFC superstar congratulated Statham on his “excellent job” and posted his rendition, in which he shamelessly holds a bottle of his Proper No. Twelve Irish Whiskey.

McGregor dared none other than Floyd Mayweather to take on the #bottlecapchallenge next.

Maybe we’ll finally get to see if “Money” can kick as artfully as he can throw hands.