Beer Before Wine Is Not Always Fine, New Study Says

Just drink whatever whenever you want, it’s gonna hurt either way. 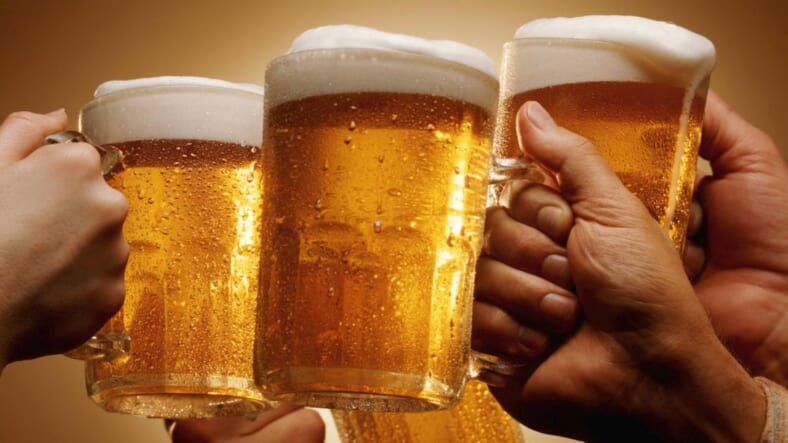 Turns out one of those comforting rhymes learned by newbie drinkers was lying to us all along. Contrary to the spirit of “Beer before wine, all is fine. Wine before before beer, oh dear,” (or any variation on that little ditty) science has found the order in which we consume has no bearing on whether there will be hell to pay on waking the following day.

That’s right. The poetically-titled study, “Grape or Grain But Never the Twain?” says nothing will save us from pain.

The study, performed by researchers in Germany and the United Kingdom and published in The American Journal of Clinical Nutrition, took 90 volunteers, ages 19-40, and divided them into three groups. The groups drank beer and white wine, but they consumed in different patterns: beer then wine, wine then beer—you get the picture.

Our findings dispel the traditional myths “Grape or grain but never the twain” and “Beer before wine and you’ll feel fine; wine before beer and you’ll feel queer” regarding moderate-to-severe alcohol intoxication, whereas subjective signs of progressive intoxication were confirmed as accurate predictors of hangover severity.

So. It doesn’t matter which order you choose, you’re still gonna get hammered, one way or the other, as long as steady consumption is the order of the day—or the evening, because come on, day-drinking is for the weekends.

Men did come out a little luckier, however—the study found that women get hit harder by the hangover train than men.

Weirdly childlike rhymes regarding intoxication are like their own genre of poetry. BuzzFeed collected 75 of them here, including:

1. Beer before liquor, never been sicker.

2. Liquor then beer, have no fear.

6. Beer from a bottle, piss at full throttle.

7. Ale before sleeping, morning of weeping.

8. Three pints of Guinness, get down to bin’ess.

9. Shots on a plane, long will you reign.

10. Big gin and tonic, get histrionic.

As fun as these are, it seems like a good bet they’re all a load of b.s. too. Best to just take some aspirin or Alka-Seltzer before bed and drink plenty of water the next day. Also, maybe some Pedialyte.