“Teslaquila” was gone faster than one of Musk’s electric cars. 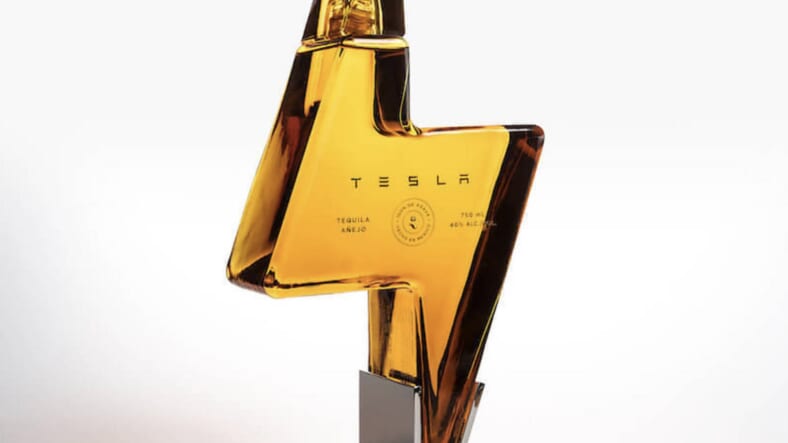 Elon Musk has sold Tesla electric vehicles, flamethrowers, and now tequila. And it’d probably be great to taste some of what the mogul’s company says is “an exclusive, premium 100% de agave tequila añejo aged in French oak barrels,” but the lightning-shaped bottles have already sold out.

While Tesla attempted to limit availability to just two bottles per customer and only released it to select U.S. states, Tesla’s tequila (they didn’t actually call it “Teslaquila” but they should have) was sold out in just a matter of hours.

This is not too bad when considering that selling the spirit appeared to begin—like more than a few of his ideas—as an Elon Musk joke.

In a very Musk-like turn of events, the CEO actually jokingly teased the release a Tesla tequila on Twitter back on April Fools Day in 2018, also mentioning his filing of an application with the U.S. Patent and Trademark Office to trademark the name “Teslaquila.” Clearly, joke’s on all of us given the popularity of the released product a whole two years after that odd announcement.Believe it or not, this isn’t Tesla’s first foray into non-electric endeavors. In July, as a nod to the investors that “shorted” the company’s stock, Musk’s team started selling satin red gym “short shorts” for $69.420 each.

Sometimes Musk’s jokes backfire on him badly. Obviously not this time.

This seems like a missed opportunity to bundle Tesla products and show them off by getting drunk on the tequila behind the wheel of a self-driving EV while firing the flamethrower out the driver’s side window, but we’re just spitballing here.

As Time Out suggests, anyone jonesing for the unique bottle at least can check eBay. However, people are putting the empty bottle up for the price of the original and unopened bottles are up for auction beginning at a minimum of $695.

In case Tesla chooses to re-stock, you can check it out on the company website: shop.tesla.com/product/tesla-tequila.