These Are the Best-Selling Liquor Brands of the Pandemic, According to Drizly

Can you guess which spirit sold the most bottles during lockdown? 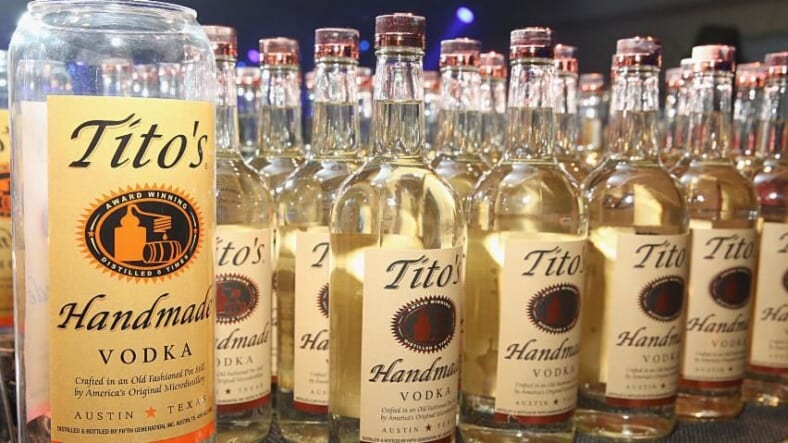 The lockdowns, closures and overall anxiety created by the coronavirus crisis have led to a spike in alcohol (and marijuana) sales, with one spirit in particular proving especially popular. Now, the top-selling spirits of the pandemic have been revealed, according to e-commerce platform Drizly. Kate Dingwall, a regular contributor to Maxim.com, served up Drizly’s 10 best-selling spirits brands for Forbes.

Bringing up the rear of the list, Smirnoff vodka and Johnnie Walker scotch took tenth- and ninth-place, respectively. They came behind three tequilas: Patron in eighth, Don Julio in seventh, and Espolon in sixth place.

Bulleit bourbon captured third, while second place went to Casamigos, the tequila company cofounded by George Clooney and sold to spirits giant Diageo for a reported $1 billion in 2017.

So which spirit was the most popular of them all? That would be Tito’s Vodka, which has sold the most booze on Drizly since the coronavirus pandemic began.

Lindsey Andrews, CEO of spirits-ordering service Minibar Delivery, added that the independently-owned Texas vodka is also the best seller there across all categories. On average, Minibar Delivery receives an order for a bottle of Tito’s every five minutes.

Love, Tito’s—the distillery’s philanthropic program—has also pledged $2 million to charities that are helping out-of-work restaurant employees and those affected by food shortages, while the brand promised to repurpose its facilities to make 24 tons of ethanol-based sanitizer.