Ray-Ban Stories shades let wearers capture and share photos and video, listen to music and podcasts and take phone calls all from their frames. 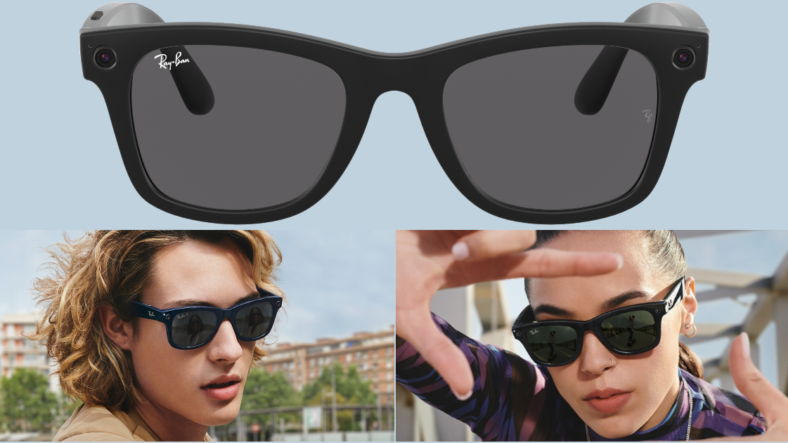 A new partnership between Facebook and Ray-Ban, the classic sunglasses brand originally launched in 1936, has produced the first pair of smartglasses likely to set the standard for anything after.

Opening the box and seeing Ray-Ban Stories smartglasses can produce a burst of nostalgia. On one hand, they’re Ray-Bans, still cool enough today that they resist being described as “retro.” On the other hand, they’re definitely not anything like your Dad’s favorite shades.

The team behind Ray-Ban Stories put it succinctly in a recent Zoom meeting with journalists: They didn’t set out to create next-level tech that looked a little like glasses, they set out to create glasses holding technology. And they succeeded.

The genius in merging Facebook tech-savvy with Ray-Ban design is a wearable that doesn’t scream “tech geek”—Google Glass didn’t do so well in part because it looked like the wearer was performing cyborg cosplay—and is cool enough to inspire others to ask where they can get their own.

With their new product, Facebook and EssilorLuxottica (parent company of Ray-Ban) combined smart tech and comfort you can wear all day.

The technology is impressive. It includes an optimized Snapdragon processor, dual integrated 5MP cameras to capture photos and video, and a three-microphone audio array that permits a fuller experience in voice transmission, eliminating the “tinny” character that still dogs some smartphones and related wearables.

In testing the glasses another feature stood out: open-ear speakers in the temples for calls and listening to music from your phone.

There are plenty of wearables out there that permit the user to listen to music while still being aware of the sounds around them, but Facebook and Ray-Ban have engineered their speakers with remarkable subtlety: You can take a walk beside a relatively busy road with music playing and your music will still be fully present. The experience is akin to having a real soundtrack for your day.

The app is well-designed with an eye toward minimalism. It makes it easy to edit, and share content captured by the glasses. You can pretty much upload to whatever social app you like, including Facebook and Instagram (naturally), WhatsApp, Messenger, Twitter, TikTok, Snapchat—you get the idea—and the images captured by Ray-Ban Stories are comparable to pics taken on pretty much any top-shelf smartphone available now.

Facebook View is important for reference when setting up and using Ray-Ban Stories, as it contains a simple and clearly laid-out tutorial on using the wearables’ functions.

In testing them, we had one small complaint—the process for taking still photos and videos with the glasses isn’t as intuitive as it could be. Example: To snap a still photo, you press and hold a subtle little button on the right temple. A little click sounds in your ear to let you know the photo was made. To record video, however, you just press once. A tone sounds then, letting you know you can capture up to 30 seconds of footage.

The operation choices seem like they should be reversed—a quick press to snap a pic, a long hold for video. The Facebook and Ray-Ban creators are very concerned with ensuring the glasses don’t get used as improvised spy machines, however (a distinct light on the exterior of the glasses signals to others you are capturing footage), and it may be that the non-intuitive choice was made to ensure users have a chance to think about what they’re doing.

Ray-Ban Stories can be purchased as regular sunglasses, transitions lenses, or with your own prescription. They come in a sturdy, stylish case that doubles as a charging dock and the charge port is USB-C compatible. The smartglasses are available in a variety of familiar, iconic styles, including the legendary, retro Round, and the Meteor.

The Facebook View app is free and price-wise, the collab has managed to keep the smartglasses affordable. They start at $299, and Ray-Ban Stories will be available at Ray-Ban stores and on Ray-Ban.com beginning September 9.