Proceeds from sales benefit the Tunnel to Towers Foundation. 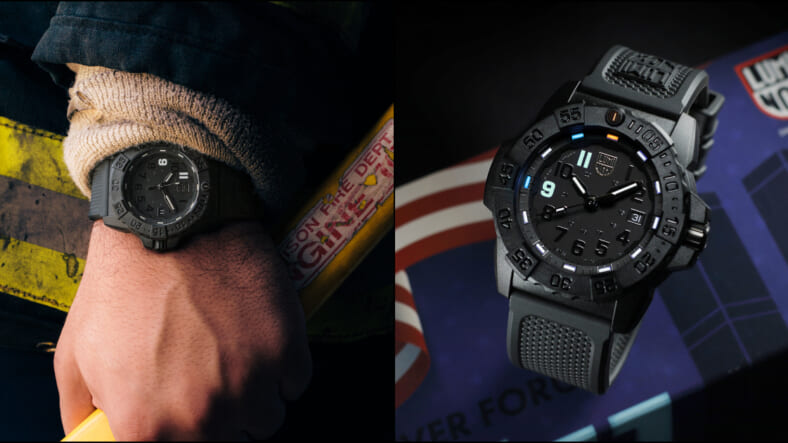 On September 11, 2001, first responders in New York and in Washington DC found themselves called into action, embodying the very meaning of the word, “hero.” Afraid or not, they streamed into the burning Twin Towers of the World Trade Center and the shattered Pentagon, hellbent on doing their jobs, regardless of the consequences.

As the 20th anniversary of that terrible day approaches, Luminox has launched the 3500 Never Forget Series, watches created in remembrance of those who lost their lives serving the public good during an unprecedented moment of national crisis.

Luminox’s “Never Forget” series isn’t just intended to remember the sacrifices made that day, but a portion of the profits from watch sales will also benefit the Tunnel to Towers Foundation. Founded by his older brother to honor FDNY firefighter Stephen Siller, Tunnel to Towers has for 20 years been supporting those who still risk their lives each day with efforts like mortgage-free homes for injured vets and first responders as well as aid for the families of those who have fallen in the line of duty.

In a news release accompanying the launch of this line, Luminox U.S. CEO Lluis Sole said, “It feels like yesterday and a lifetime ago when the country suffered the most devastating terrorist attack in the history of the nation. On 9/11, 403 police officers, firefighters, and paramedics lost their lives.”

“This collection brings attention to this tremendous loss,” Sole continued, “and will remind all of us to never forget.”

The 3500 Never Forget Series is a classic Luminox product. It comes in a deep black colorway, which the watchmaker says is “the darkest of all Luminox watches.”

As part of commemorating 9/11 first responders, numbers 9 & 11 on the Never Forget Series dial are highlighted with bright white super-luminova. When it’s dark and the watch is in night view, blue tritium tubes set those numerals apart, a touch that Luminox said in a press release is meant to remind us to “Never Forget.”

It’s Luminox tough as well, with a lightweight but tough 45mm CARBONOX™ case.

Per the manufacturer, here are additional features found on the 3500 Never Forget Series of watches:

The Luminox 3500 Never Forget series retails for $495. Get yours at Luminox.com.