A fighting man’s guide to eating right in 2016. 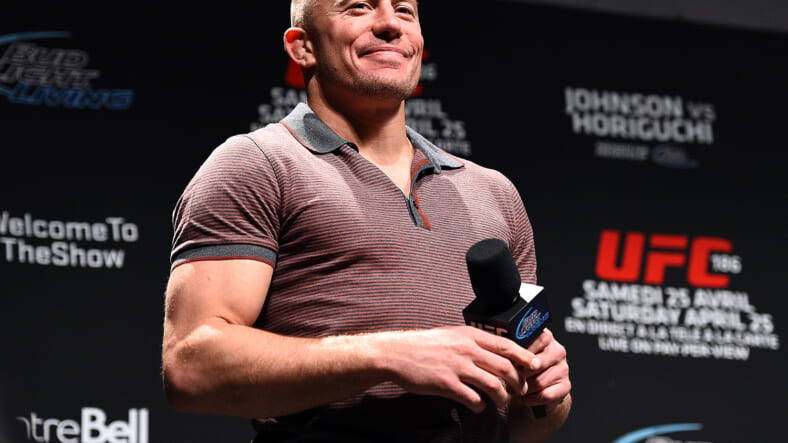 UFC fans have been waiting with bated breath for Georges St-Pierre to step back into the ring. The former UFC welterweight champion, called GSP by his fans and known to the wider world as Batroc the Leaper in 2014’s Captain America: Winter Soldier, announced a break from fighting two years ago, but was loathe to say if he was retiring for good.

Now, there are signs the 34-year-old Canadian legend is gearing up for a comeback in 2016. His trainer Firas Zahabi recently told ESPN that GSP is enduring a “test training camp” to see if he’s still got what it takes to step into the Octogon. Time will tell, but Zahabi is optimistic. “I think he loves the sport and he gets excited about the idea of fighting again,” he told ESPN. “I see him in practice all the time and the guy is incredible. He’s still the best. I think Georges is going to make a splash soon.”

It’s going to take a lot of training for GSP to get back on top, and we are sure his diet is going to be similarly brutal. Back in 2013, his nutritionist Dr. John Berardi revealed to Tim Ferriss and The 4 Hour Workweek that the UFC fighter follows a stringent, high-protein diet to get in peak shape. Here, learn how to eat like a UFC champ.

Brace yourself: Georges St-Pierre’s eats between 3200 and 3500 calories per day. That’s about 25 grams of lean protein, 350 grams of carbohydrate, and 100 grams of fat. He splits this into three meals, which consist of two low-carb meals and one high-carb post-workout meal. Both are, of course, loaded with protein.

For the two low-carb meals eaten whenever:

For the one high-carb meal eaten one hour after training:

These meals are interspersed with two “super shakes” for snacks, which add up to 282 calories (18 grams of protein, 25 grams of carbohydrate, and 12 grams of fat). They consist of the following:

GSP also makes sure to fuel his body for his insane workout routines. Before training, he has half of a protein bar (Dr. Berardi recommends Finibar from Biotest).

During training, he’ll have a workout drink for a boost (Dr. Berardi recommends Surge Workout Fuel from Biotest).

Tailor your diet: Before you ever consider such a diet, remember that you have got to work out hard if you want to see results. And I mean hard … like, UFC fighter hard. You have got to stick to whole foods, like fresh vegetables and fruits, grains, and lean meats. And finally, you need to take your unique metabolism and body type into account. Dr. Berardi has suggestions on how to tailor the plan to your metabolic needs.

Ectomorphs, or people with thin builds and difficulty in putting on muscle or fat, should eat less protein and more carbs.

Mesomorphs, or those whose bodies are enviously best at putting on muscle, should eat a bit more protein.

Endomorphs, who are brawny and should be cautious of putting on too much fat, need to watch their carb intake.

This regimen is designed to get results. When GSP adopted it back in 2009, he reportedly gained 12 pounds of lean muscle in just eight weeks. While most of us don’t have time to train like a UFC champion, this routine is the perfect inspiration for making those New Year’s gains actually worth the work.