6 Ways to Stop Hair Loss, According to Science

Here are the best ways to keep what you’ve got. 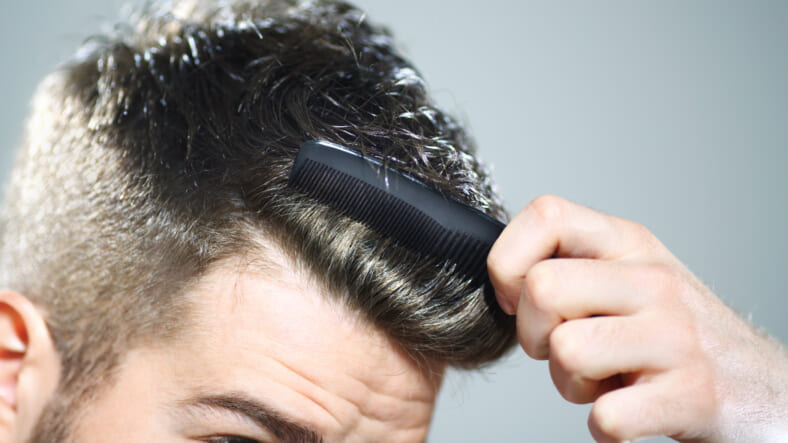 Statistics show that by the age of 35, around 66 percent of men lose a considerable amount of hair, and by 55, 85 percent of men have significant hair loss…by which I mean bald or balding. I’m really sorry, but that means there’s a giant chance you’re either going to go completely bald, or at least partially.

And even though it’s not the end of the world if (or when) you lose your hair, it’s certainly not pleasant to go through, and it can take a huge shit on your self-esteem. Life is mean, isn’t it?

However, if it’s any consolation, it’s actually been scientifically proven that women totally dig bald dudes and get all hot in the panties for them, because they see baldies as smarter, more dominant, and overall way sexier than men who still have a perfect head of hair.

But if that’s not enough solace to make you come to terms with going bald, there are some science-backed ways to try and discourage hair loss and keep your hair where it belongs, which I’ve outlined in great detail in this helpful list of 5 ways to stop hair loss.

There are many evils in this world, but stress is actually one of the worst, and it’s a lot more dangerous than you’d think.

When you’re stressed out, your body releases extra cortisol — the official stress hormone from your adrenals — which is known to promote serious diseases like diabetes, metabolic syndrome, tumors, heart disease, and impaired immune function, among others.

What’s more is that chronic levels of high cortisol can lead to adrenal fatigue, which totally messes up your body’s hormone balance thereby expediting hair loss if you’re genetically predisposed to baldness, and it can even make you lose your hair if you’re not predisposed, too, which is why you should keep your stress levels in check if you want to keep your beautiful head of hair intact.

One of the easiest ways to reduce stress is by practicing meditation and mindfulness when you’re feeling worked up, and melting the tension away before it fucks you up. Another easy way to reduce stress is to work out every day, but not so much that you’re beyond exhausted. Everything in moderation, my friend.

Plus, a 2015 study revealed that aging men who have high levels of cardiorespiratory fitness release 42 percent less cortisol throughout the day compared to men who don’t work out, which should be reason enough for you to hit the gym ASAP.

The active ingredient in Rogaine, minoxidil, has been proven to slow hair loss and possibly regrow some of your hair, and even though it can’t reverse male pattern baldness completely or forever, it’s worth a try.

“Rogaine is the gold standard in terms of topical treatments,” Joshua Zeichner, Director of Cosmetic and Clinical Research in Dermatology at Mount Sinai Hospital, told Men’s Health. “It’s FDA-approved to treat thinning at the vertex, or top of the head, but I recommend my patients use it on the frontal hair line, too, where hair is receding.”

And for the best results, try to remember to use it twice a day. “In the real world, it’s very difficult to get anybody to apply anything twice a day,” he says. “Do the best that you can.”

“Rogaine often gets a bad rap because people don’t use it correctly,” explains Dr. George Cotsarelis, a professor of dermatology at the University of Pennsylvania. “You have to use Rogaine at least twice a day and for at least six months before you see any results. It can actually cause shedding in the first month or two.”

Propecia works by reducing the production of DHT by as much as 60 percent, and while the treatment doesn’t work for everyone, stats show that about a third of men regrow some of their hair, another third don’t lose any more hair, but sadly, it doesn’t do shit for the remaining third.

Now, before you run to your doctor for a bottle of Propecia, there are some things you should know about the drug, such as the number one most reported side effect: Erectile dysfunction, which can actually kill your mojo for years after you stop taking the drug.

A study published in the Indian Dermatology Online Journal found that as much as 15.8 percent of men have erectile difficulties on the drug, and a separate study of 11,909 users revealed that 1.4 percent of men who developed ED while taking the pill still had trouble getting it up 3.5 years after stopping the drug.

With that in mind, some might argue that Propecia may not be worth it, because you can’t do much with your penis if you’re one of the 8 percent. Others, however, think their hair is more important than libido and sexual performance, and choose to take that admittedly small risk.

Sure, it’s a lot easier to just use whatever random soap is in the shower, but if you want to give your hair a little more staying power, try using ketoconazole shampoo instead.

Ketaconazole shampoo is generally used for dandruff and seborrheic dermatitis, but there’s clinical evidence that it can also act as an anti-androgen and block the conversion of testosterone to dihydrotestosterone (DHT), which is the hormone that shrinks hair follicles and makes hair fall out.

You can get 1 percent ketoconazole shampoo, such as Nizoral, at basically any drugstore or supermarket, or you can ask your doctor to prescribe you one with 2 percent for something a little stronger.

But remember to only use a quarter-sized amount two to three times a week, or else it could irritate your scalp and dry out your hair and just make things worse, which is counterproductive.

A study published in the British Journal of Dermatology found that vitamin D is suuuper important for hair, and that people who have alopecia areata, which is in autoimmune disease that causes patchy hair loss, were three times more likely to be D deficient, meaning a D deficiency is very likely a causative factor in hair loss.

Another supplement you might want to consider taking is a B-complex, because B vitamins aid in healthy stress responses, and more specifically, B7 helps thicken hair, and B5 supports adrenal health. And as we previously established, you can’t have healthy hair without healthy adrenals.

Health comes from the inside out, and if you’re not supplying your body with the proper nourishment, it won’t matter if you throw prescription hair loss pills at your head all day — it’ll still fall out.

Dr. Whitney Bowe, a board-certified dermatologist, says: “One of the first ways I can tell how healthy someone is — and if they’re eating nutritiously — is by looking at their hair.” That said, it’s important to up your intake of nutrient dense foods if your hair is thinning.

Some of the best anti-hair loss foods  are:

But just as there are foods you should eat, there are also certain foods you should make an effort to avoid, because they’re known to increase inflammation and encourage the production of DHT, which, as I said earlier, causes hair loss.

Foods to avoid include:

While there’s no miracle cure for male pattern baldness just yet, trying out these simple suggestions just might make a huge difference and help you keep that beautiful hair of yours for a while longer…but if not, don’t fret. Just shave your head and rock that chrome dome. Your life will be so much easier, and the ladies will love it.