The “Mad Men” bombshell is taking leisure time to the next level. 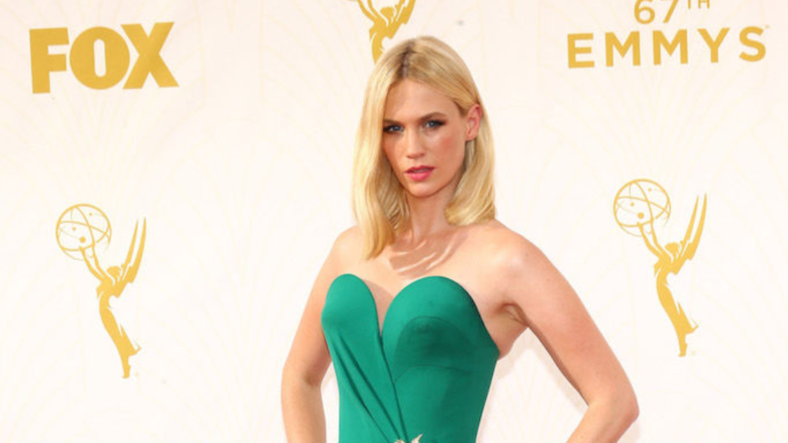 For someone with such a wintry name, January Jones keeps things warm on her Instagram feed. Okay, not just warm, hot. In a recent example, she managed to heat up the screen and promote the benefits of just chilling out with a good book.

To her credit, the 44-year-old Mad Men star anticipated the possibility that the image of her at poolside clad in a nude corset top and sweats with some retro-chic shades and a Danielle Steel novel in her lap might get some negative feedback.

In her caption, Jones wrote that hers was “The look of someone poised for your literary judgment.”

“[Sometimes],” she added, “I need to take a break from cultivating my path to intellectual superiority and read a 90’s romance novel to stay grounded ;)”

Comments from her followers, however, didn’t reflect much concern with Jones’s literary tastes. Some asked about her shades and others admitted there’s nothing wrong with kicking back with a trashy novel, but a few also were pretty sure that Jones had revealed a bit more than intended with her top, pointing out what they said was essentially a semi-nip-slip, with her areola just peeking above the material.

Jones followed up with another book post the next day. This time she was reading the 2016 Man Booker prize-winning novel by Han Kang, The Vegetarian.

In the caption, Jones wrote that she was “Going back and forth between light and dark.”

Or low and high, perhaps. Danielle Steel’s immense success as a novelist has been built on her ability to craft crowd-pleasing fiction, while the Man Booker Prize is one of the most prestigious in all of literature.

Then again, The Vegetarian has been described as a “mesmerizing mix of sex and violence” and “provocative” and “shocking.” It may be that January Jones‘s literary tastes in mass-market fiction or celebrated literature are much more consistent than it seems at first.

At this point, January Jones could probably start a successful, celebrity-led book club, but let’s face it, her Instagram presence is entertaining whether she’s talking books or clapping back at a tabloid preparing to publish an article about her online presence being worrisome to her friends.

Enjoy some more selections old and new from her Insta below.