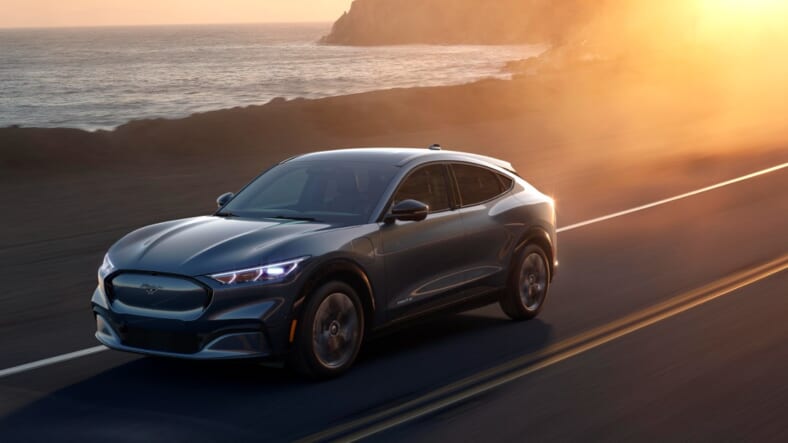 Ford has taken the plunge into the rapidly-growing electric vehicle market, and their first foray, the 2021 Mustang Mach-E, gets it right on all fronts. From exhilarating performance to tech that anticipates daily needs, the Mach-E paints a bright picture of where the company is heading in the EV game. After spending a week with this futuristic flagship, here’s some revelations from behind the wheel of the new Ford Mustang Mach-E.

The Mustang Mach-E first impresses with striking design cues. The long hood tapers to a flat front end that, without a traditional grille, still manages to look menacing and cool. The fastback-esque rear end comes off streamlined and goes a long way to making the pseudo-SUV hatchback of the Mach-E look and feel sporty despite its utility. The Mach-E may not share the sports car heritage of its namesake but it does seem to share its style with the current incarnation of gas-powered Mustangs that have proven to be so popular.

The visual similarities between the Mach-E and gas-powered Mustangs are, functionally, the only similarities that exist between the two. Driving the Mach-E is a wildly different experience compared to any Mustang that’s existed prior to now. Utterly silent while still being plenty powerful, the 346hp, single-speed transmission takes some getting used to. Off the line, the Mach-E’s 0-60 leaves something to be desired, feeling slightly sluggish compared to its GT, gas-powered counterpart.

Mid-range acceleration was a different story though. The Mach-E zipped from 50 to 90 with the press of a pedal and little other fanfare, with handling better than any Mustang I’ve ever driven. The normal feeling of downshifting was oddly absent in these circumstances but the ability to deliver that mid-range power while completely sticking to the road was impressive. All of this testing was done using the Engage and Unbridled drive modes, as the Whisper mode that promised a “calm” driving experience wasn’t really of interest.

In terms of function, the body of the Mach-E makes it much more accessible as a daily driver than a typical Mustang. There’s an enormous amount of trunk space inside the Mach-E’s signature hatch. The interior is decked out in luxurious, red-piped leather that’s comfortable and classy. The missing shifter – replaced by a now-commonplace gear dial – is an omission that might irk driving enthusiasts looking to instinctively reach for a shifter that simply isn’t there.

The Mach-E also sits higher than a typical Mustang, giving ground clearance that supplants the need to worry about scraping lips and front bumper spoilers. In almost every way, the Mach-E performs better than a traditional Mustang when it comes to being a reliable and fun commuter car. Oh, and the doors pop open with the push of a button instead of the pull of a handle and, as far as I can tell, that button push will never lose its satisfying feel.

In that vein, Ford has absolutely packed the Mach-E with creature comfort tech that adds to the refinement of their new EV that’s not expected in a Mustang. When driving, the Mach-E’s ability to self-parallel-park and the option to turn on one-pedal driving that nixes the need for the brake in stop-and-go traffic were welcome features.

The gorgeous 15” touchscreen display hub controls almost every aspect of the car, from battery management to scheduling that’ll pre-warm the car on cold days, using the heated seats, wheel and thermostat controls.

Ford has leveraged their SYNC system for the foundation of the Mach-E’s infotainment center but layered both Android Auto and wireless Apple Carplay on top of it. The end result is a highly connected car, able to play nice with any smartphone, that’s supremely capable, versatile and convenient.

That connectivity is paramount because there’s much to monitor when it comes to the Mustang Mach-E. Primary among them is battery life. Using Ford’s proprietary app and the cellular connection in the car, keeping an eye on battery life was a no-brainer. Alerts and scheduling exist here as well to make sure the car is always ready to go when you are.

The Mach-E does work with universal superchargers that are abundant in NYC and its surrounding areas and Ford gives two years of free supercharging with purchase. It’s a good thing too because the regular charger that plugs into a household outlet leaves something to be desired in terms of getting you back on the road.

The smart battery system in the Mach-E will fill up the tank quicker when the tank is emptier but, twice during testing, eight hours on standard charging only juiced the Mach-E up 8-10%. Owners will undoubtedly want to call in an electrician to get superchargers installed at home but that’s true of almost every EV on the market.

Starting at $42,895 but really coming in $7,500 lower than that because of a federal tax credit that’s currently available, Some Ford enthusiasts may not fully understand why the Mach-E falls under the Mustang banner, but they’ll still find enough to love about this exciting new EV, from its performance to its thoughtful array of technology. If the Mach-E represents a turning point for what Ford wants the Mustang brand to become, it’s a great first step in what’s sure to be the next era of a historic legacy.