The New Lamborghini Countach Is Already Sold Out

Buyers paid as much as $3.5 million to cop the revived Countach. 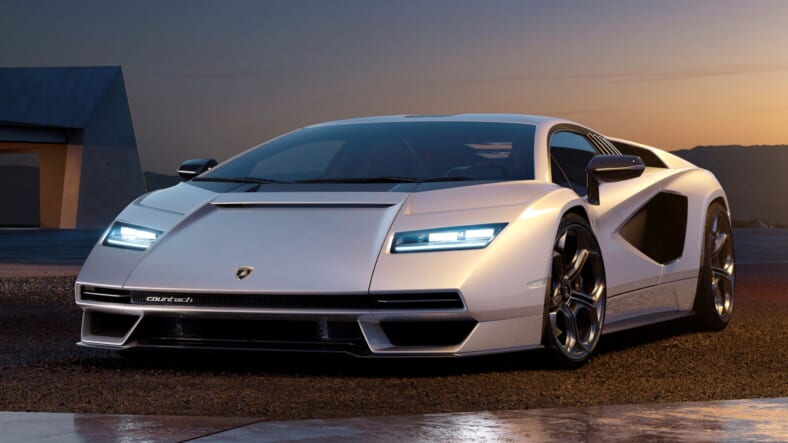 Lamborghini’s unprecedented decision to resurrect a nameplate in for a new Countach proved to be a massive success, as every example of the hybrid supercar has already been spoken for.

By the time most people laid eyes on the modern iteration of the wedge-shaped 80s exotic during its reveal, all 112 limited-edition Countach LPI 800-4s had been snatched up, Motor 1 reports.

Prices haven’t been publicly announced, but rumors indicate that buyers paid anywhere between $1 and $3.5 million to own the retro Raging Bull.

Even the low side is significantly more than this one–of-a-kind 1984 Lamborghini Countach 5000S fetched at Gooding & Company’s recent Pebble Beach event by the time bidding closed at $720,000. But the revived Countach boasts far more than historied title.

Sitting over the rear axle is the same hybrid combo of a 6.5-liter V12 and a 48-volt e-motor that pushes 819 combined hp to all four wheels in the limited-edition Sian, Lambo’s most powerful production car. However, it’s 220-plus mph top end bests the Sian’s 217-mph max speed, and it’ll hit 60 mph just as quick in a blistering 2.8 seconds.

References to both the inaugural LP400 that debuted in 1974 and the second-gen LP500 that entered production in 1982 are also hidden throughout the new Countach’s design, from the hexagonal wheel arches to the angular hood’s long, rectangular shaped grille and headlights. These elements are entirely distinct from the complex geometrical heads of the Sian and Aventador.

Be sure to snap a pic if you see the Lamborghini Countach LPI 800-4 in the wild.