An Electrifying First Drive in the Tesla-Rivaling Polestar 2

With Elon Musk’s electric car company in its crosshairs, this 408-horsepower grand tourer comes out swinging. 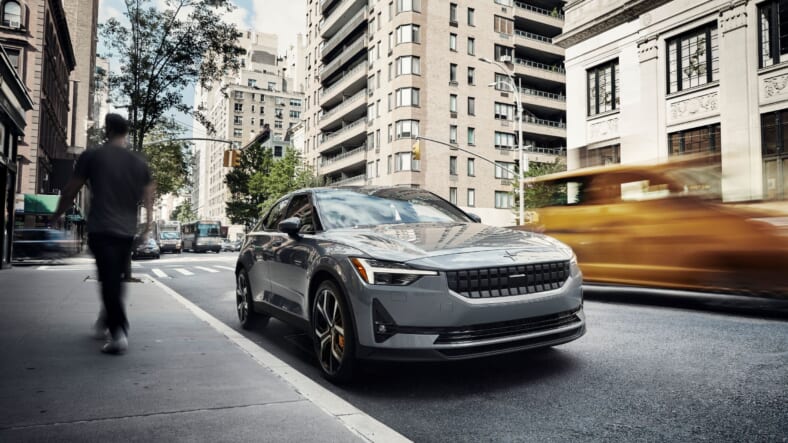 This summer we had the joy of getting behind the wheel of the Polestar 1 — a sleek GT coupé with twin electric motors bolstering a 4-cylinder lump that is both super- and turbo-charged. Its “Electric Performance Hybrid” powertrain boasts a combined 619-hp and 738 lb-ft of churning torque.

Although a splashy flagship with a 155 mph top speed and 0-60 mph click in under 4 seconds, all wrought in a crisp body made entirely of carbon fiber, Polestar will only make 150 of its flagship per year for three years. The Polestar 1 is a halo car in both performance and exclusivity.

Now this autumn the Swedish/Chinese automaker will release the first of its volume offerings: the aptly named Polestar 2. Once the performance arm of Volvo, when the Chinese conglomerate Geely Car Group bought Volvo they also absorbed its performance arm and quickly spun Polestar into its own brand — one focused strictly on electric propulsion.

Positioned as a ‘Guiding Star’ for the group, Polestar will act as Geely’s technology spearhead pioneering new technology, sustainability and performance attributes to market. Smaller and ostensibly agile, it is Polestar’s onus to lead the charge in all things electrification, meaning both powertrain propulsion and battery tech.

To get a chance at experiencing the five-door fastback P2 we visited the brand’s gleaming new popup shop/store/dealership on Santa Monica’s 3rd Street Promenade. Given these weird times the famously sardine-packed outdoor mall is currently a ghost town, bringing pangs of empathy for the bad timing in renting such an outrageously expensive storefront.

But this is how Polestar will operate: launching with retail locations in Manhattan, two in the SF/Bay Area, and here in SaMo, plus three Canadian locations (Toronto, Montreal and Vancouver). Next year comes Denver, Boston, DC, South Florida and Texas — all offering complimentary pickup and drop-off servicing within a 150-mile radius. Polestar claims these stores will cover 85% of US and 95% of Canadian reservations holders.

You might recognize this distribution model from Tesla, arguably Polestar’s most direct competitor. The big difference being unlike Tesla who owns their dealerships Polestar will franchise them — in Santa Monica’s case to one of LA’s largest and most respected dealerships, Galpin Motors.

Slip inside the P2 and the first thing that strikes you is the minimalism of the cabin — clean and spartan, all centered around a giant 11-inch touchscreen installed vertically. The brand’s lofty sustainability goals are manifest in the vehicle with the use a new lightweight material called WeaveTech. The durable fabric enables near elimination of plasticizer (vs. traditional vinyl and cloth); carpeting is made from recycled water bottles. The standard interior is fully vegan with two colors combos to select from, charcoal and slate, both with a reconstructed black ash wood trim.

There’s also a third leather option ($4,000) made of high-grade ventilated and perforated Nappa leather — but Polestar has seen nearly no one ticking it so far (as opposed to the Performance Package which has a roughly 50% uptake). This is a vehicle that wears its green badge of honor on its sleeve.

Taking the Polestar 2 out for its paces on both the wide open stretches of PCH and the winding canyon roads that ride above it, we were able to get a sense of the EV’s strengths. As with all EV’s the Polestar 2 boasts the luxury of instant torque unspooling from the twin Valeo-Siemens electric motors offering 487 lb-ft of takeoff torque (complementing 408 horses).

Although power is delivered evenly to front and rear axles, a rear wheel bias is sporty, and its 51/49 front/rear weight distribution means the P2 balances its mass well. As is also the case with all EVs, significant battery weight is an issue as the Polestar 2 tips the scales at 4,680-lbs (as compared with similar five-door fast/hatchbacks like the Hyundai i30 or VW Golf which come in under 3,000-lbs).

This means even with the Performance Pack’s Continental SportContact 6 tires the P2 tends to understeer — especially on the twisting spaghetti roads that spread across the Malibu hills. Its suspension setup with Öhlins dampers and McPherson struts up front are sporty and capable, but it’s a lot to ask to absorb the 1,100-lb battery pack. Still the P2 sprints quickly (0-60 mph in 4.45 seconds) and with the Performance Pack’s bespoke Brembo four-piston golden calipers also stops nicely. Add the regen braking which begins absorbing speed the moment you lift the throttle, and you can have some fun ‘one pedal driving’ — meaning modulating speed simply by pressing and releasing the throttle without ever touching the brake pedal.

As can be expected of a tech-focused brand the P2 is loaded with electronic goodies. Featuring the first Android Automotive–powered infotainment system on the market, the voice control lets you eschew touching the central display as much as possible. Like Mercedes-Benz’s “Hey Mercedes” feature, with “Hey Google” you can set temp to 72 degrees; ask the P2 to tell you a joke, or direct you to Mom’s house with a simple command. Just like Tesla the car reads your phone’s Bluetooth coming and opens all doors, starts the car etc., all without touching a button.

The only real issue with the P2 is the giant, Elon Musk Ego-sized elephant in the room. There’s no secret the P2 has one car in its crosshairs: the Tesla Model 3. It is the standard for this segment of EV in which all other EVs will be compared. The Polestar stacks up well in the aesthetics, design, and interior comforts. The tech is equal if not better in most cases (especially in the UI; big points for Android Auto), with the giant knock that there’s no Autopilot or Self-Driving Capability that comes close to Tesla’s. That’s a pretty huge deficit.

And while acceleration performance is superior to the base Model 3 (5.6 to 5.0 seconds 0-60 mph), it is sub-par to the Model 3 Performance model, which takes off like a SpaceX rocket (0-60 mph in a dizzying 3.2 seconds) and offers significantly more range (P2 numbers still pending but should be in the mid-200 mile window).

When you consider the Tesla Model 3 Performance ($54,990) starts around $5K cheaper than the P2 ($59,900 for Launch Edition, fully loaded standard) the needle bends towards the Model 3. Still, Polestar has created a handsome, sporty, tech-laden zero emission alternative to the Tesla monolith that will certainly cause plenty of cross-shopping.