This high-end pickup is worthy of a night on the town. 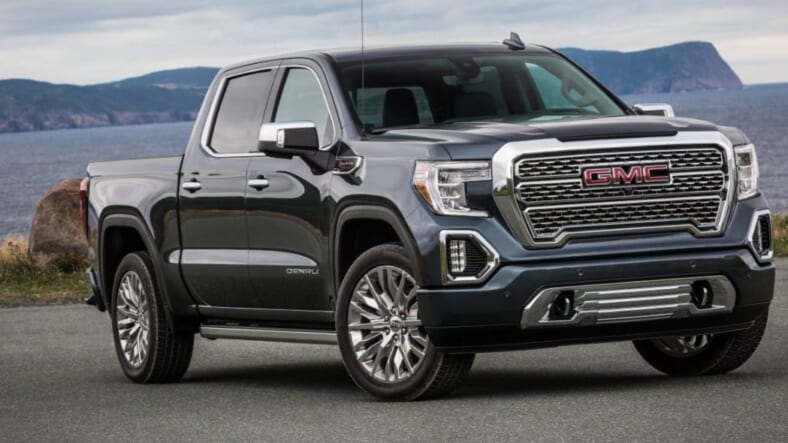 The 2019 GMC Sierra Denali is the high-end counterpoint to GM’s other pickup, the Chevy Silverado. It embodies a mixed message, simultaneously representing the plush luxury and tech-forward thinking that is a badge of the GMC line while shoehorning these features into a class of vehicle usually meant to be an absolute workhorse.

Starting with the overall look of the Sierra, the 2019 edition maintains the hard, angular lines characteristic of GMC’s recent style. It’s definitely a good look, especially when decked out in chrome trim from grille to tailgate.

That style, paired with the 6.2 liter V8, is another example of the Sierra’s split personality. It’s certainly capable of towing and can really move its big ass just fine with those 420 horses galloping under the hood. Thanks to a 10-speed automatic transmission, it gets surprisingly good fuel economy for its class (17/23 MPG).

The Sierra’s leather interior leaves something to be desired. It looks nice at a glance but feels lacking while sitting in the driver seat. It’s an odd result that, at a guess, might be attributed to cheaper leather. Make no mistake, there’s still something regal about sitting in the captain’s chair at the helm of a mini-monster truck like the Sierra—but this shortcoming seems at odds with the Denali mission.

Otherwise, GMC has smartly outfitted the Sierra Denali’s interior with every bell and whistle at their disposal. An arm-rest with a built-in wireless charging pad, optional in-car cellular wifi and options for holographic windshield projections too. All in addition to the big, bright dash-mounted heads-up display featuring Apple’s Carplay for easier nav and comms directly from your iPhone.

Mixing that tech-forward approach with the utility of a pickup, the 2019 Sierra Denali’s tailgate may be the truck’s piece-de-resistance. Borrowing its engineering from Optimus Prime and the Autobots, the transforming tailgate quickly and easily changes from step to an extender for the flatbed to a normal auto-up and down gate, all at the touch of a button.

Should the Sierra Denali be considered a work truck? A party-mobile? An ideal road trip ride? It’s capable of almost anything you can throw at it but ultimately it’s up to whoever plunks down the $54,700 starting price ($66k+ to get fully spec’d) that gets to decide how they’ll use it.