Ruiz is now the first boxer of Mexican descent to become heavyweight champion, and an inspiration to fat guys everywhere. 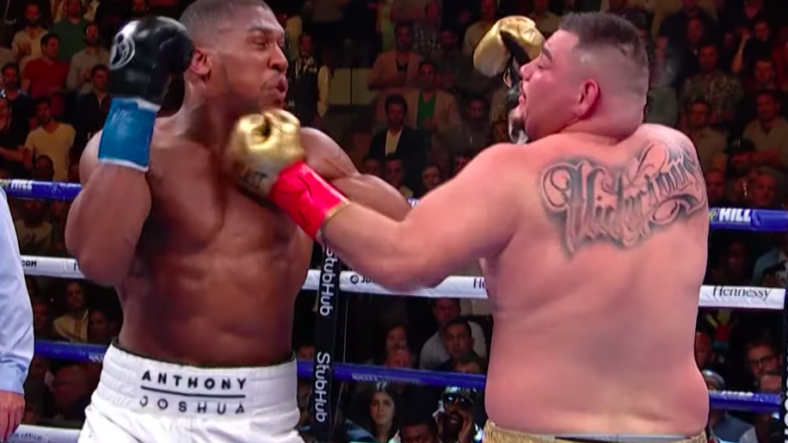 “He wasn’t a true champion. His whole career was consisted of lies, contradictions and gifts,” tweeted WBC heavyweight champion Deontay Wilder. The “he” in Wilder’s savage tweet was British heavyweight superstar Anthony Joshua, who had—in his American debut—just lost his WBA, IBF, and WBO belts in stunning fashion to Andy Ruiz Jr. on Saturday night.

A massive underdog just like Buster Douglas was before he toppled Mike Tyson, Ruiz knocked down the previously-undefeated Joshua four times, and the final two in the seventh round were the decisive blows that led to Ruiz’s 7th round TKO victory that shook the boxing world.

After Ruiz recovered from a third-round knockdown and let his fists fly, his fast hands and relentless combinations eventually proved too much for Joshua, who came into the fight as a 20-1 betting favorite to face Ruiz, a late replacement for Joshua’s original opponent, Jarrell Miller.

Fight fans around the world were both shocked and thrilled by the perfectly-sculpted Joshua’s surprise loss to his roly-poly opponent, who has already been called the “Mexican Rocky.”

I know first hand the toughness of the Mexican chin.
They come up off the floor like something out of thriller.
It is never over until it’s over with the Mexicans.
God bless them.
Congrats Andy Ruiz. pic.twitter.com/8Vquwjny6z

UFC superstar Conor McGregor, no stranger to the boxing ring, tweeted his congrats to Ruiz and stating that he knew “first hand the toughness of the Mexican chin.”

Ruiz’s upset victory made podcaster, comedian and UFC commentator Joe Rogan take to Instagram to reflect on why he loves the sweet science so much.

“Nights like this are one of the many reasons why I love fights,” Rogan wrote, “Weird shit happens when people punch each other in the head. Most of the time when people ask me ‘who is going to win?’ I say, ‘I don’t know. That’s why we have to see them fight.’ I say that because I’m being honest.”

However, Rogan continued, “There are windows in time where you’re convinced you know the outcome. Where a king has lain waste to all who challenge his dominance, and you’re SURE he’s going to win a fight. Then, someone like @andy_destroyer13 comes along and flips the whole thing right on its fucking head and shocks the world. I LOVE shit like that. “

As for the fight itself, Ruiz secured his place in boxing history—both with the upset and with his newfound status as the first boxer of Mexican descent to ever become a heavyweight champ—with an unexpected blend of strategy and skill. USA Today broke it down:

Ruiz, a flabby fighter out of Southern California, came up short in his only other shot at a world title, having lost on points to then-WBO champion Joseph Parker in December 2016.Ruiz even warned Joshua before the fight: “Don’t underestimate this little fat boy.”The 270-pound heavyset heavyweight knocked Joshua down twice in the third round and did it two more times in the seventh before referee Mike Griffin ended the fight. Joshua was woozy and seemed to stumble toward the wrong corner after the final blow.

OMG! OMG! I cannot believe this S$&@$! Anthony Joshua — holder of 3 belts, gets TKO’d by Butter Bean…….I mean some dude named Andy Ruiz JR. What a damn disgrace. Joshua looked completely gassed! More fatigued than hurt! Now how in the Hell did you let that happen? How?

There were some commentators who were frustrated by the outcome, which seemingly destroyed a future Wilder/Joshua superfight.

Like ESPN’s Stephen A. Smith, who tweeted in part, “Look, Ruiz is good. Solid boxer. Fast hands. But everyone’s missing the point: THE FIGHT we were all waiting for — Wilder vs. Joshua — is officially ruined. No one with sense believes Joshua has a chance vs him now, even if he goes back and beats Ruiz.”

I watched the fight 3x. Look, Ruiz is good. Solid boxer. Fast hands. But everyone’s missing the point: THE FIGHT we were all waiting for — Wilder vs. Joshua — is officially ruined. No one with sense believes Joshua has a chance vs him now, even if he goes back and beats Ruiz.

“I’ve got that Mexican blood in me,” he said. “Talking about the Mexican style? I just proved it.”

Joshua shouldered the blame for his loss, regardless of extenuating circumstances noted by viewers like Stephen A. Smith, such as him appearing strangely winded. “Sorry I let my fans down,” he said, “Sorry I let my supporters down.”

He also made it clear he wasn’t done. “I’m still a champ and I will rectify it to get the belts back. I have dealt with more than this in life. We didn’t come this far to stop under pressure.”

Joshua congratulated Ruiz on Instagram in a post that brought responses in the comments from no less than Dwayne “The Rock” Johnson and Naomi Campbell.

Obviously, social media lit up with reactions to the fight. Here are just a few of the most notable:

He wasn’t a true champion. His whole career was consisted of lies, contradictions and gifts.
Facts and now we know who was running from who!!!!#TilThisDay

WOW! Andy Ruiz just shocked the world! That was one of the biggest upsets in boxing history.

We have our back and Forth’s but @anthonyfjoshua changed his stars through life. heavyweight boxing, these things happen, rest up, recover, regroup and come again 👊🏼

This flabby guy whom 99% of American sports fans have never heard of is now the undisputed heavyweight champion of the world. Andy Ruiz beating Anthony Joshua is the biggest upset in boxing since Buster Douglas beat Mike Tyson. pic.twitter.com/FMHFLRQ5e4

A little more than a year ago, Andy Ruiz Jr., representing himself as his own manager, was offered $30,000 to fight Anthony Joshua. Last night, he got $7 million for the fight. Now, as heavyweight champ, he will make even more. pic.twitter.com/zTUXpNpL8r

Andy Ruiz Jnr was a 30:1 underdog to beat Anthony Joshua
after Liverpool's defeat to Barcelona some bookies were offering 100:1 against them winning The Champions League
two lessons here:
1) the future ain't written
2) will is about 90 % of everything pic.twitter.com/273orGaOW9

It looks like Joshua’s next bout will be a rematch with Ruiz later this year, as Joshua said he would “100 percent” exercise the rematch clause in the fight contract.

But even if he defeats Ruiz in a rematch, Joshua’s suspect chin is now an even riper target for the heavy-punching Wilder, who is set for a Tyson Fury rematch in 2020 if he can get past his next fight against Luis Ortiz.

Meanwhile, let’s hope Drake stays away from all of these fighters, as there are a few who believe Joshua fell prey to something called “The Drake Curse.” From TMZ:

Back in March, the then WBO, IBF and IBO heavyweight champ posted a pic with Drizzy, and even went so far as to say he was going to “break the curse” on June 1. Oops.Drake’s got a pretty extensive track record of jinxing teams — just ask Alabama football, Italy’s Roma soccer team, Conor McGregor and Serena Williams.He’s even mocked the curse lately — wearing Philadelphia 76ers shorts to jinx that team last month when they were playing his beloved Toronto Raptors … and it worked.

But no matter what happens next, Ruiz is the most-talked about heavyweight on the planet right now and deserves major props from boxing fans — and chubby dudes — for his inspiring performance in the biggest fight of his life.