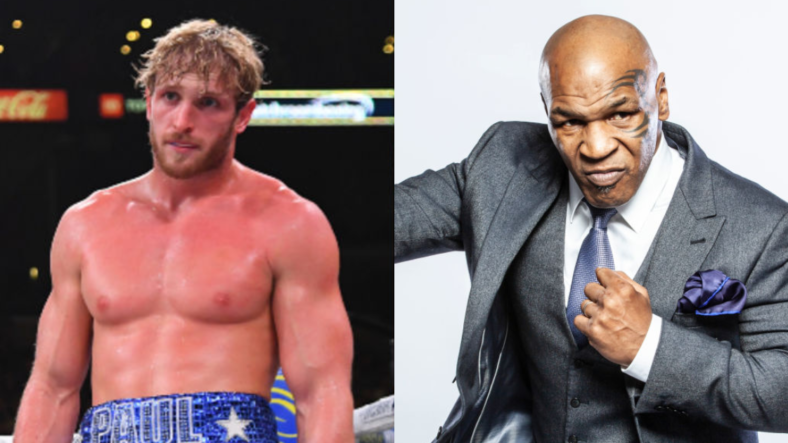 Now that he’s withstood eight rounds in the ring with undefeated all-time champ Floyd Mayweather, Logan Paul has clearly gained even more confidence in his fighting skills. He thinks he could take on “old, old” Mike Tyson.

In fact, on his “Impaulsive” podcast, Paul, 26, sounded downright insulted at the idea he could lose to Tyson, age 54.

Paul was talking with brother Jake, undefeated at 3-0, about additional fights he could take on. “Someone mentioned Mike Tyson, like how funny is it?” he said, “One great at a time.”

“My lawyer mentioned it,” Paul continued, “and he’s like, ‘No, Tyson will rip your head off. You don’t stand a chance.'”

Obviously, Paul disagreed and went all in on a little ageism in doing so, saying, “I’m like, ‘Bro, I just went through all of this. You can’t tell me I can’t beat Mike Tyson.’ Bro, he’s old, old.”

The New York Post reports that Tyson has previously expressed little interest in taking on such an exhibition match:

Weeks before Paul survived Mayweather — although the 44-year-old dominated every statistical category in the bout — Tyson expressed he had no desire to fight either Paul brother.No, I love those guys,” the 54-year-old told TMZ when asked if he’d fight Jake and Logan.

Paul is 6’2″ and 180. In Mayweather, he was taking on a brilliant tactician who was physically much smaller (5’8″ and normally around 150, though he gained for the match with Paul) and perhaps only slightly slower than in Money’s prime. That Paul stayed vertical throughout the match was a miracle in the eyes of some, and actually added to his cred.

However, even at 54, Tyson is 5’10” and 220 pounds of solid muscle, still, and though the fight between him and Roy Jones Jr. in November 2020 was a more-or-less lighthearted exhibition, it was pretty clear that Tyson could still move and still punch with plenty of power.

If Logan Paul get to fight Mike Tyson we need a ‘DNR’ clause in the contract. pic.twitter.com/TvdbeGb5T1

If The Logan Paul-Mike Tyson Fight Was To Happen… pic.twitter.com/D7pzvEAYrh

Old or not, Mike Tyson would spin Logan Paul’s head off his body like a Beyblade.

Logan Paul if he took one punch from Mike Tyson…
pic.twitter.com/coic741lOV

Being in your fifties in 2021 is not the same as it was even 20-30 years ago, and this is especially true for Tyson, who still appears to train ferociously and who drops bombs in interviews like the time he asked Joe Rogan, “What does it mean when fighting gets you erect?”

In evaluating the safety of fighting Mike Tyson, Logan Paul might be wise to pay a lot more attention to old footage of the fighter savagely snacking on Evander Holyfield’s ear or to the multiple interviews Tyson has given through the years in which he has been disarmingly honest both about his mental health challenges and his mindset as a fighter.

While Tyson’s attitude toward both Logan and Jake Paul seems almost kindly, as befits a senior statesman of boxing, he’s got a nearly 40-year-long pattern of deciding that once he steps in the ring to fight, it’s all on the line, no matter who his opponent may be.

Being in your fifties might make a man a little slower, even a little nicer in public, but in some ways, you’re a little meaner, too, and less likely to put up with nonsense.

Paul is big and an able enough fighter that even Tyson has been impressed with him. He could definitely do some real damage to anyone. But just because Iron Mike has gray in his beard, it would be a big mistake to assume the former heavyweight champ is rusty.