The golf goddess entered the fray with a Tom Brady-inspired meme. 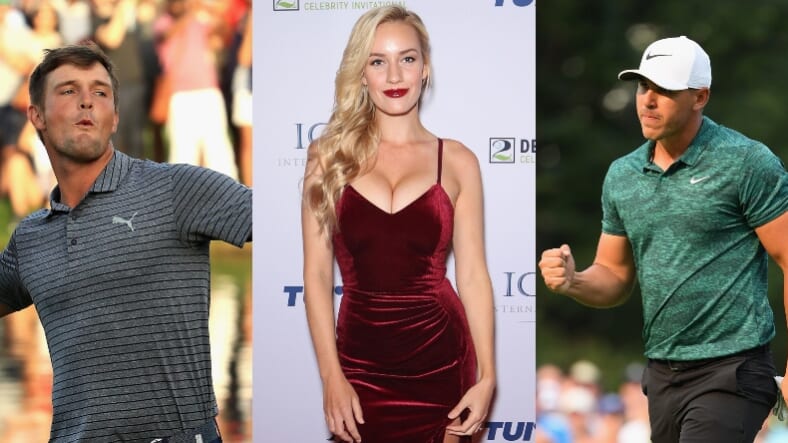 The fiery feud between top 10-ranked PGA players Brooks Koepka and Bryson DeChambeau has moved from the golf green to internet memes, and Paige Spiranac is getting in on the action.

I feel like I’m in the middle of something and should step aside. (Except they want the CURRENT PGA champ:)

ESPN reported on the cheeky social media banter following the announcement that Tampa Bay Buccaneers quarterback and Phil Mickelson would be taking on DeChambeau and Green Bay Packers quarterback Aarond Rodgers on July 6 in “The Match.”

“Sorry bro @AaronRodgers12,” Koepka tweeted as an apparent dig at Rodgers’ teammate, who responded directly with a barb of his own.

“@BKoepka It’s nice to be living rent free in your head!” DeChambeau fired back.

Brady then entered the fray by creating a meme based on leaked viral video in which Koepka rolled his eyes at a passing DeChambeau and began swearing as he lost his train of thought during a post-round interview at the PGA Championship.

This is why @BKoepka is the best. He doesn’t hide anything, he genuinely can’t stand @b_dechambeau. pic.twitter.com/FLtf8x9jOj

DeChambeau didn’t hesitate to go after the seven-time Super Bowl champ, either. He tweeted an image of Brady clutching an airless pigskin and the caption, “@TomBrady, once @AaronRodgers12 and I take down you and @PhilMickelson, you will feel just as deflated as those balls were in the AFC Championship game.”

@TomBrady, once @AaronRodgers12 and I take down you and @PhilMickelson, you will feel just as deflated as those balls were in the AFC Championship game. pic.twitter.com/K3KobiDLya

Spiranac showed support for Brady and Mickelson. The “OG Insta golf girl” declared the 43-year-old NFL star the GOAT for penning the meme and created one of her own depicting Koepka kissing a frustrated DeChambeau.

When the PIP check comes in pic.twitter.com/msIs8qzSmk

“When the PIP check comes in,” Spiranac tweeted to her 441,000 followers in reference to the PGA’s Player Impact Program.

To be fair, Spiranac is a DeChambeau fan, too. She heralded the buff golfer’s monster drive at the this year’s Arnold Palmer Invitational at Bay, Hill Florida in March.

Okay this was cool pic.twitter.com/8yKmQhyBVA